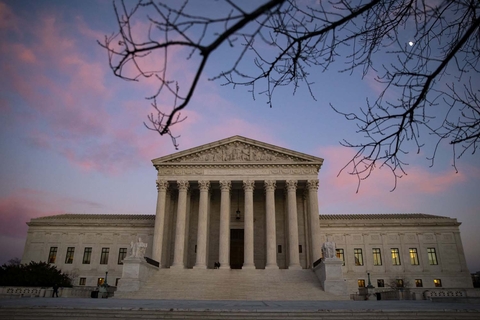 The Supreme Court allowed President Donald Trump's transgender military ban to go into effect on Tuesday, dealing a blow to LGBT activists who call the ban cruel and irrational.

The Justices did not rule on the merits of the case, but will allow the ban to go forward while the lower courts work through it.

The four liberal justices on the Court objected to allowing the administration's policy banning most transgender people from serving in the military to go into effect.

The policy, first announced by the President in July 2017 via Twitter, and later officially released by then-Secretary of Defense James Mattis in 2018, blocks individuals who have been diagnosed with a condition known as gender dysphoria from serving with limited exceptions. It also specifies that individuals without the condition can serve, but only if they do so according to the sex they were assigned at birth.

In a statement released after the SCOTUS decision to allow the ban to go forward, the Pentagon sought to clarify that its policy is not a ban on all transgender persons from the military.

The court's move is a victory for the Trump administration. While government lawyers wanted the Court to take up the case, they also fought to allow the ban to go into effect while the case plays out in the lower courts.

"Today's dual rulings on the transgender ban allow the controversial policy to go into effect for now, but also allow the appeals to go forward in the lower courts," said Steve Vladeck, CNN Supreme Court analysis and professor of law at the University of Texas School of Law.

"The government had asked the Justices to take the issue up even before the appeals courts could rule. Even though the Court denied that request, the fact that the Court is allowing the policy to go into effect suggests not only that it will eventually take the case on the merits, but also that five of the Justices believe the government is likely to prevail if and when that happens," Vladeck said.

In July 2017, Trump surprised military leaders by tweeting, "After consultation with my Generals and military experts, please be advised that the United States Government will not accept or allow Transgender individuals to serve in any capacity in the U.S. Military," Trump said. "Our military must be focused on decisive and overwhelming victory and cannot be burdened with the tremendous medical costs and disruption that transgender in the military would entail."

His tweets came less than a month into the six-month delay set by Mattis to review the US military's policy on transgender service members.

By the government's own numbers in 2016, there were approximately 8,980 Service members that identify as transgender. During the Obama administration, 937 members were diagnosed with gender dysphoria and began or completed their transition.

In December, the Justice Department asked the Supreme Court to allow the ban on transgender people in the military to go into effect pending appeal after the lower courts froze the ban.

The petitions he filed asked the justices to take up the issue in three separate cases that are still in lower courts so it could be decided definitively this term.

He wrote that because of the injunctions, "the military has been forced to maintain that prior policy for nearly a year" despite a determination by Mattis and a panel of experts that the "prior policy, adopted by (Defense Secretary Ash Carter), posed too great a risk to military effectiveness and lethality."

Under normal circumstances, the Supreme Court does not like to take up an issue before it has made its way through the lower courts. The justices like to have issues percolate below so that they can benefit from the opinions of lower court judges.

Francisco has moved aggressively at times to get cases before a Supreme Court that is more solidly conservative with the addition of Justice Brett Kavanaugh. In one such case, Francisco recently asked the court for emergency help to let the administration's asylum ban go into effect.

This story is breaking and will be updated.