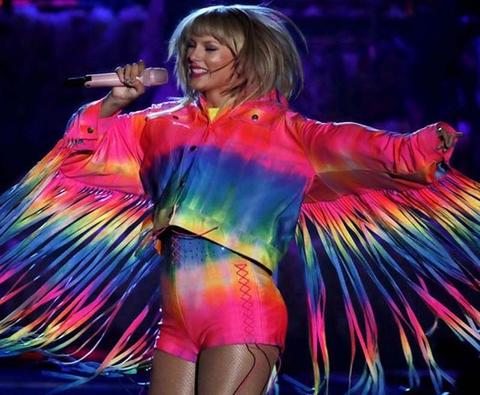 Taylor Swift gave a surprise performance Friday night at the Stonewall Inn and wished the crowd at the site of the LGBTQ+ rights landmark a happy Pride Month.

The gay bar in New York's Greenwich Village was holding an event celebrating the 50th anniversary of the 1969 Stonewall uprising, which was a catalyst for the gay rights movement.

"I was totally shocked because it's such a small space. Everyone went crazy!" said Kyle Luker, who shot video of the Grammy-winning singer playing "Shake It Off."

He'd been at the club for about 90 minutes when Swift came on stage.

Actor Jesse Tyler Ferguson emceed the event and joined Swift on stage to dance and sing along.

"I'm so happy I don't have to keep this secret any longer. Look who came to celebrate the 50th anniversary of Stonewall at the Stonewall Inn. @taylorswift13, you are a gem. Thank you for everything you do for the LGBTQ+ community. We (heart emoji) you!" he wrote, ending the tweet with a rainbow emoji

Friday was a busy day for Swift.

She also released a new single from her upcoming album, Lover, which is scheduled to come out August 23.

A video for the song You Need to Calm Down drops Monday.

The song's lyrics challenge internet bullies and express support for the LGBTQ+ community.

In April, Swift donated $113,000 to the Tennessee Equality Project, a pro-LGBTQ+ advocacy group.