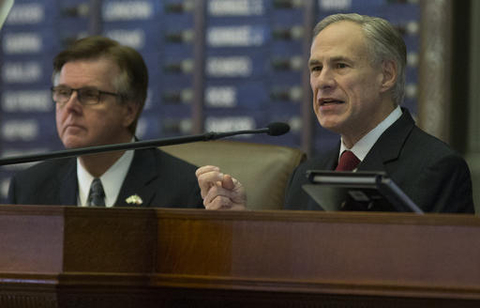 Texas Gov. Greg Abbott, right, delivers his State of the State address to a joint session of the House and Senate. AP Photo, Stephen Spillman - File.

AUSTIN, Texas (AP) — Texas Gov. Greg Abbott called for a punishing so-called "sanctuary cities" while laying out a new agenda in his second State of the State address on Tuesday. Beyond cracking down on local governments that don't fully cooperate with federal immigration agents, here are other highlights from his speech:

Abbott's hour-long speech passed without a call for transgender people to use bathrooms corresponding to their sex at birth. It was another sign that a top priority of Lt. Gov. Dan Patrick is struggling for momentum beyond the Senate as business leaders predict economic backlash if Texas adopts laws that LGBT advocates call discriminatory.

STILL SAVING FOR A RAINY DAY

The oil bust left Texas lawmakers billions of dollars short and confronting budget cuts. But Abbott is already rejecting talk of tapping into the $11 billion in the state's Rainy Day Fund to cover the gaps and ordered a hiring freeze through August at most state agencies as a way to curb costs.

Abbott has grown more vocal in supporting school vouchers that gives public money to families who remove their children from public schools and send them to private and religious alternatives. But he stopped short of making vouchers a priority and the House has long resisted a push that Democrats and rural Republicans say would hurt public schools.

ANOTHER CRACK AT ETHICS REFORM

Abbott didn't get the sweeping ethics reforms he declared a priority in 2015 after the House and Senate clashed over disclosing donors for politically active nonprofits. Two years later, an ethics package in the Senate would put new restrictions on revolving-door lobbying and demand more disclosure by lobbyists who spend money to wine and dine lawmakers. But it keeps the status quo on so-called "dark money."
_