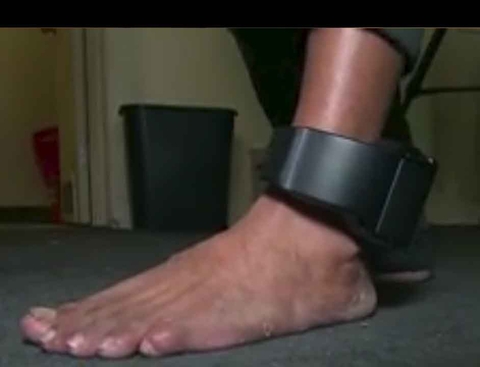 Asylum seekers may be released with ankle bracelet location devices with they await a decision on their fate. CNN photo.

The Justice Department is considering a regulation that would prevent people from claiming asylum if they're convicted of illegally entering the US, according to two sources familiar with the plans.

Such a rule would be a dramatic change in the landscape of US immigration law and could conflict with domestic law and long-standing international obligations.

The draft regulation was described to CNN as being in its very early stages and has not yet been submitted to the White House for review. Should it be implemented, it would likely result in immediate legal challenges from asylum-seekers and advocates.

The proposal was first reported by Vox.

Current law allows migrants to raise an asylum claim at any lawful port of entry to the US, as well as between valid ports of entry where crossing to the US is illegal.

The Immigration and Nationality Act states that anyone who arrives in the US "whether or not at a designated port of arrival" may apply for asylum if he or she has a "well-founded fear of persecution on account of race, religion, nationality, membership in a particular social group, or political opinion."

Yet another part of the law gives Attorney General Jeff Sessions the leeway to regulate which offenses "will be considered to be a crime," in which case asylum is not available.

How exactly the rule will be tailored and whether it will include any exceptions remains unclear.

But there are also international treaty obligations that require the US to treat asylum seekers in ways that comport with international human rights and refugee protections, including not barring their ability to apply for asylum.

The UN Refugee Convention states: "The Contracting States shall not impose penalties, on account of their illegal entry or presence, on refugees who, coming directly from a territory where their life or freedom was threatened in the sense of Article 1, enter or are present in their territory without authorization, provided they present themselves without delay to the authorities and show good cause for their illegal entry or presence."

However, there is a part of the law that describes asylum as discretionary -- something Sessions has already signaled he's looking to expand on in recent months.

Earlier this month, Sessions reinterpreted asylum law to make asylum substantially more difficult to qualify for. In his opinion, Sessions suggested that immigration judges could consider factors like entering the country illegally against their discretionary ability to grant asylum, potentially a road map for the new regulation.

The thinking behind such a plan to limit asylum is consistent with views expressed by many Trump administration officials who -- when facing the intense backlash over the separation of migrant families at the southwest border -- have emphasized that asylum-seekers should go to valid ports of entry.

"We're talking about entrances out in the deserts, remote areas, dangerous areas, people bringing children," he added. "That should not be happening as it is in the United States."

Some experts say placing such a burden on an asylum seeker -- especially as many of them don't have access to a lawyer and are not given one by the government -- could be prohibitive for many.

His controversial decision earlier this month sets a high bar for victims of domestic or gang violence to qualify for asylum.

The government of the home country must not only be unable or unwilling to help the victims, he said, but also "the applicant must show that the government condoned the private actions or demonstrated an inability to protect the victims."