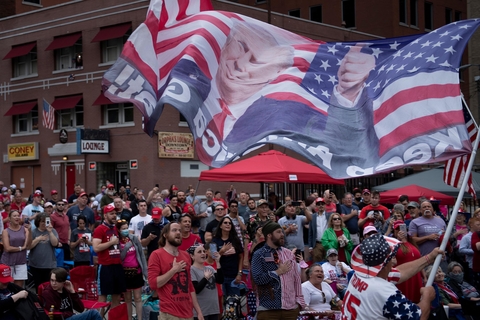 In the days leading up to President Donald Trump's Saturday rally in Tulsa, Oklahoma, he and his allies ginned up expectations for a massive crowd with campaign officials telling CNN that more than a million people had registered to attend, and one local official stating they expected 100,000 to show up near the arena.

But those crowds didn't appear as large as expected Saturday afternoon, leading to an abrupt change of plans by the campaign. A campaign source told CNN that the team was abandoning plans for the President to speak to an "overflow" area outside the arena in Tulsa where only a couple dozen people were standing near the outdoor stage less than two hours before the rally.

The campaign had been leaning toward canceling Trump's remarks to the overflow crowd for fear of angering the President if there aren't as many people there as he expected when he lands.

Shortly before the rally began, a CNN producer who signed up for rally tickets received a text from the Trump campaign telling people to come inside: "The Great American Comeback Celebration's almost here! Doors are OPEN at the BOK Center. Pres. Trump can't wait. There's still space!"

The President had hoped that the Tulsa rally would mark a triumphant return to the campaign trail more than 100 days after the coronavirus shut down the country and halted all in-person campaigning. Recent national polls have shown Trump falling far behind his Democratic rival, former Vice President Joe Biden, in head-to-head matchups. By trying to resume the massive gatherings that fueled his 2016 bid, Trump is hoping to reinvigorate his reelection bid in the midst of a pandemic, a recession and a national debate over racism.

Still, for Trump, the quick trip to Tulsa is a welcome respite from the controversy over yet another firing that looks like it's meant to protect him -- this time of a powerful prosecutor investigating his associates.

A rally amid controversy

Though many medical experts, including top health officials within his administration, have warned against large gatherings at a time when coronavirus cases are rising in Oklahoma, Trump is holding this evening's event at the indoor Bank of Oklahoma Center arena, creating the potential for what medical professionals refer to as a "super spreader" event.

Few rallygoers were wearing masks as they entered the venue to take seats that were right next to one another. The crowd standing near the stage was already tightly packed as people without face coverings stood face-to-face talking to one another as loud music played in the background.

Trump initially was scheduled to hold the rally on Friday, which would have fallen on Juneteenth, the day commemorating the end of slavery in the United States. That decision angered many progressive leaders and protesters who have been in the streets demonstrating against racism in the weeks since George Floyd was killed by a Minneapolis police officer. The decision was particularly fraught because of Tulsa's history as the site of one of the worst racially-motivated massacres in US history in 1921 when a White mob attacked Black residents and business owners in the Tulsa neighborhood known as Greenwood.

The President changed the rally date to Saturday in what he described as a gesture of respect to the observance of Juneteenth, but he has continued to antagonize protesters. On Friday, he warned in a tweet that protesters could be roughly handled.

"Any protesters, anarchists, agitators, looters or lowlifes who are going to Oklahoma please understand, you will not be treated like you have been in New York, Seattle, or Minneapolis. It will be a much different scene!" he tweeted.

This weekend, the Trump administration was engulfed in a new controversy after Attorney General William Barr announced that Geoffrey Berman, the US attorney for the Southern District of New York, was stepping down. Berman said in a statement Friday night that he had no intention of leaving his office. That led Barr to write a letter to Berman stating that he had asked the President to remove him, "and he has now done so," Barr wrote.

As he departed from the White House Saturday for Oklahoma, Trump said he is "not involved" in the attempted firing of Berman, and that the decision was up to Barr.

Earlier in the day, a federal judge denied the administration's attempts to block the upcoming publication of a book by former national security adviser John Bolton.

Trump spent much of Saturday upset because he believes the coverage of Berman and the campaign staffers who have tested for coronavirus are overshadowing what he'd hoped would be his triumphant return to the campaign trail, one person familiar with the matter told CNN. He was frustrated about the coverage of Berman's ouster and the six staffers because he hoped to see the cable news covering the crowd outside the rally arena, the person said.

Trump was also irritated at having to do the rally on a Saturday night instead of Friday because he believes fewer people will tune in, another person familiar said. The New York Times first reported Trump's frustration.

The Trump campaign's gamble in holding a big rally at a time when Covid-19 cases are rising in nearly half the states across the country was already apparent Saturday when CNN confirmed that six members of the campaign's advance team tested positive (out of hundreds of tests that were performed, the campaign said).

Tulsa County reported a new record of daily coronavirus cases on Saturday -- the fifth record-setting day this week. Trump campaign manager Brad Parscale was in the arena ahead of the rally wearing a mask, but Trump's son Eric Trump was not wearing a mask.

The President, who has never worn a mask in front of the media, told The Wall Street Journal earlier this week that he was comfortable with his supporters wearing masks.

"They can wear them or not," he told the newspaper. "I want them to be happy."

Campaign aides are tested before events, per the Trump campaign's safety protocols. The campaign says it is taking extra steps to keep rallygoers safe.

"As previously announced, all rally attendees are given temperature checks before going through security, at which point they are given wristbands, facemasks and hand sanitizer," campaign communications director Tim Murtaugh told CNN in a statement Saturday.

But face masks -- which Trump's own public health experts recommend to slow the spread of the virus -- are not required inside in the rally.

While the Trump campaign created an overflow area for the Tulsa rally outdoors -- an environment that epidemiologists say is safer than in an indoor venue -- most of the crowd appeared to be centered in the arena.

"The set-up for the rally is currently a confluence of conditions that lead to thriving of the virus," Dr. Rochelle Walensky, Chief of the Division of Infectious Diseases at Massachusetts General Hospital, told CNN's Ana Cabrera on CNN's "Newsroom" Saturday afternoon. "People are inside; they're close to one another; they're (not) wearing masks; they're yelling. This is exactly the condition in which the virus can really spread quickly from one to another, that leads to super-spreader events."

One man standing near the front of the rally stage as crowds filed into the arena on Saturday afternoon wore a white diaper over his shorts with a sign attached to the rear that read: "I Covid my ass to stop the spread."