Trump the dealmaker keeps any Cabinet decisions under wraps 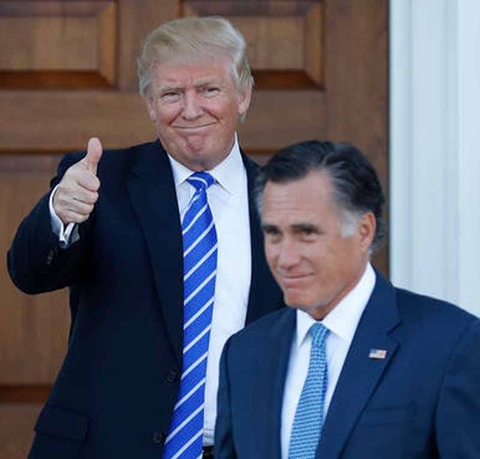 By his own account, President-elect Donald Trump has worked out a few agreements after a parade of weekend visitors who could land major appointments in his administration.

There were hints but no decisions to announce. Mitt Romney, the Republican nominee in 2012, was "under active and serious consideration" for secretary of state, Vice President-elect Mike Pence said. Trump himself said retired Marine Corps Gen. James Mattis was an "impressive" prospect for defense secretary.

"We've made a couple of deals," Trump told reporters at his Bedminster, New Jersey, golf club before returning to New York. He gave assurances that "incredible meetings" would be bringing "incredible people" into the government. "You'll be hearing about them soon."

The businessman who is now the president-elect also apparently was considering options to lead the Commerce Department, meeting with Ross. "Time will tell," Ross told reporters when asked if he wanted a post.

It was hard to tell if some of the visitors were on the job hunt. Hollywood powerbroker Ari Emanuel and BET founder Robert Johnson came through over the weekend as did health care billionaire Patrick Soon-Shiong. Trump made a show of each guest, greeting them formally at the door, shaking hands and smiling for the cameras and telling the press how "great" they were.

"King of Hollywood," Trump said, as he ushered Emanuel in the door Sunday.

Between conversations, Trump revealed he was making transition plans for his family. He told reporters that his wife, Melania, and their 10-year-old son, Barron, would move to Washington when the school year ends.

Trump also turned to Twitter to share some of his thinking. In between criticism of "Saturday Night Live," the hit musical "Hamilton," and retiring Democratic leader Harry Reid, he wrote that, "General James 'Mad Dog' Mattis, who is being considered for secretary of defense, was very impressive yesterday. A true General's General!"

The comments were indications that Trump is looking outside his immediate circle as he works toward rounding out his foreign policy and national security teams. On Friday, he named a loyalist, retired Gen. Michael Flynn, as his national security adviser.

Romney, the former Massachusetts governor and 2012 GOP presidential contender, and Trump exchanged bitter insults during the campaign, and Mattis has not been considered a Trump confidante. The appointment of more establishment figures could offer some reassurance to lawmakers and others concerned about Trump's hard-line positions on immigration and national security and his lack of foreign policy experience.

Trump told reporters Sunday that one of his most loyal and public allies, former New York Mayor Rudy Giuliani, was also a prospect for secretary of state "and other things." Giuliani at one point had been considered for attorney general, but Trump gave that job to Sen. Jeff Sessions of Alabama.

But even as Trump and his team discussed pressing issues facing the country and how to staff the incoming administration, the president-elect's Twitter feed suggested other issues too were on his mind.

His targets Sunday included Sen. Reid. Trump tweeted that incoming Senate Democratic leader Chuck Schumer, another media-savvy New Yorker, was "far smarter" than Reid and "has the ability to get things done."

Trump also complained that "Saturday Night Live," which thrives on making fun of politicians, is "biased" and not funny. The night before, actor Alec Baldwin portrayed Trump as Googling: "What is ISIS?"

Trump also insisted again that the cast and producers of "Hamilton" should apologize after the lead actor addressed Pence from the stage Friday night, telling the vice president-elect that "diverse America" was "alarmed and anxious." Pence said on CBS's "Face the Nation" that he wasn't offended.