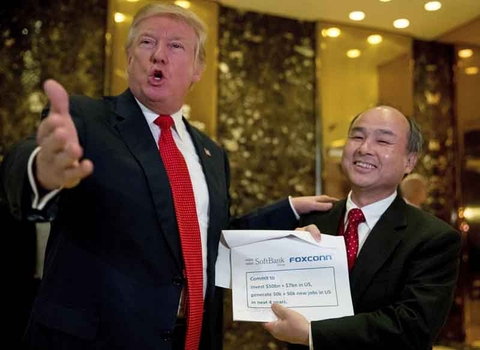 Son is the founder and chief executive of Japanese technology and telecoms giant SoftBank, which owns the U.S. mobile carrier Sprint. Sprint shares initially spiked after the announcement. Son left Trump Tower after being escorted down the elevator by the president-elect, who touted the pledge before waiting investors.

"We are going to invest $50 billion in the U.S. and commit to create 50,000 new jobs," Son told reporters. "We (will) invest into the new startup companies in the United States."

The announcement is the latest instance in which Trump appears to be conducting economic policy via ad-hoc deal-making — sometimes taking credit whether he deserves it or not. Last week, the president-elect spoke at the Carrier furnace plant in Indianapolis after the company announced plans to keep 800 jobs at the plant instead of outsourcing them to Mexico. Trump quickly claimed he had saved those positions, even though the company is still shifting more than 1,000 jobs from that factory and another Indiana plant to Mexico.

Similarly, the week after the election Trump tweeted that he had dissuaded Ford Motor Co. from moving a Kentucky factory to Mexico. The claim was a stretch; Ford had no plans to move the plant and had already agreed to keep producing one specific model there, although it did back away from a plan to shift production of the Lincoln MKC, a small SUV, from Louisville to Cuautitlan, Mexico.

Trump quickly took credit for Son's commitment on Tuesday, writing on Twitter: "Masa said he would never do this had we (Trump) not won the election!"

"I just came to celebrate his new job," Son said. "Because he said he would do a lot of deregulation, I said, 'This is great, the U.S. will become great again'."

Trump praised Son for being a "great man of industry," and "one of the truly great men," adding, "See you soon" as he headed back upstairs.

Trump plans to meet with leading tech executives next week, a group that will include venture capitalist Peter Thiel — one of Trump's few supporters in Silicon Valley — and Cisco Systems CEO Chuck Robbins. The job commitments that Trump claims to have produced are symbolically resonant. Still, the economy has generated 2.25 million new jobs in the past 12 months and many economists say that accelerating this pace may be difficult in the long run because of the aging U.S. population.

As he spoke to reporters, Son held up a paper with the logos of Softbank and Foxconn, a tech manufacturer that makes iPhones for Apple in China. The paper listed the figures $50 billion and $7 billion and said "generate 50,000 new jobs and 50,000 new jobs over the next four years.

Foxconn Technology Group issued a statement saying it could "confirm that we are in preliminary discussions regarding a potential investment that would represent an expansion of our current US operations."

The statement said the scope of any possible investment was undecided and details would be announced after discussions with "relevant U.S. officials."

Sprint has struggled since its 2013 acquisition by Softbank. The carrier's attempt to join with rival T-Mobile failed in 2014 after regulators objected to combining two of the four largest mobile telecom companies in the United States. T-Mobile has surpassed Sprint to become the No. 3 carrier, while Sprint has struggled with cost cuts and layoffs. (AT&T and Verizon are the largest wireless carriers.)

Analysts have predicted, however, that a Trump-led Justice Department and Federal Communications Commission would be more likely to allow telecom mergers , including a deal between Sprint and T-Mobile. T-Mobile has 50,000 employees and a stock-market value of $46 billion — but the similarities between those numbers and Son's commitment could just be a coincidence.

In October, SoftBank announced that it would establish a $25 billion fund for technology investments that could grow to $100 billion. SoftBank said it signed an agreement with a fund run by the government of Saudi Arabia and other investors. Japanese media said the planned $50 billion investment would come from that fund. Softbank spokesman Matthew Nicholson declined to say if it would provide the money for the U.S. investments.

SoftBank also owns Britain's ARM Holdings. ARM is known as an innovator in the "internet of things," and in technology used in smartphones. It also sells the Pepper human-shaped companion robot for homes and businesses, and runs a solar energy business in Japan. The company, founded in 1981, also has within its investment empire financial technology and ride-booking services.