Trump reschedules Tulsa rally "out of respect" for Juneteenth 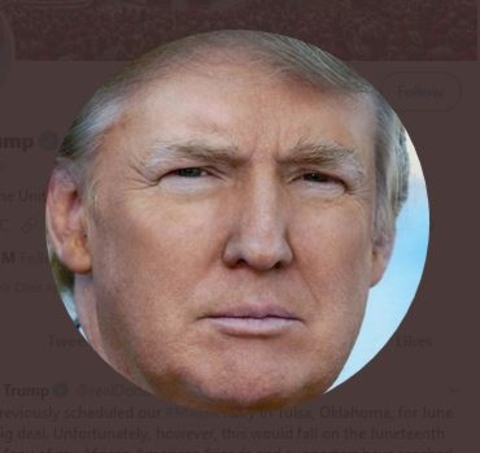 President Donald Trump announced late Friday night that he is rescheduling a rally that was to be held on June 19 -- Juneteenth, the holiday commemorating the end of slavery in the United States -- "out of respect for this holiday."

Trump's decision to hold his first campaign rally in months on the holiday was met with widespread criticism amid the national outcry following George Floyd's death at the hands of police officers and nationwide protests about police brutality and racial inequality.

"We had previously scheduled our #MAGA Rally in Tulsa, Oklahoma, for June 19th -- a big deal," Trump tweeted. "Unfortunately, however, this would fall on the Juneteenth Holiday. Many of my African American friends and supporters have reached out to suggest that we consider changing the date out of respect for this Holiday, and in observance of this important occasion and all that it represents. I have therefore decided to move our rally to Saturday, June 20th, in order to honor their requests." 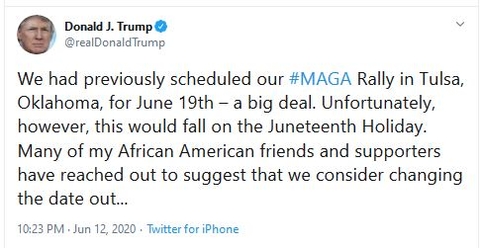 Aside from the significance of June 19, Tulsa also has a troubled racial history. In 1921, it was the site of a massacre of hundreds of African Americans during racial unrest in the historic section of the city known as "Black Wall Street."

Earlier Friday, Trump denied in an interview with Fox News that the rally was purposefully scheduled for that date in Tulsa and instead said it should be thought of as a "celebration."

But given Trump's history of racist statements, including his embrace of the birther movement, many instead saw the upcoming campaign event as a call out to rally white supremacists. Democratic Sen. Kamala Harris of California called the event a "welcome home party" for them.

The death of Floyd in police custody has renewed discussions about race in America, though Trump has not given a speech on race and has largely declined to acknowledge the concerns voiced by protesters.

During an event promoted as discussing "justice disparities" in Dallas, Texas, on Thursday, Trump warned against labeling "tens of millions of decent Americans as racist or bigots." And he has publicly opposed suggestions to remove the names of Confederate military commanders from US military assets.

Instead, he has championed himself as "your president of law and order" as he has called for harsh tactics against protesters, who he has at times labeled "thugs." He has opposed calls to scale back funding for police departments and suggested that an elderly protester in Buffalo, New York, who was hospitalized after he was pushed to the ground by police officers, was part of a "set up." When he has evoked Floyd's name, he has typically done so in the context of condemning violent protesters.

Trump suspended live campaign rallies in March due to the coronavirus. Those attending the Tulsa rally must agree to not sue the campaign if they get infected. 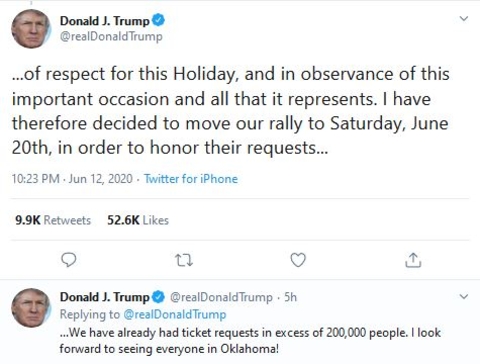