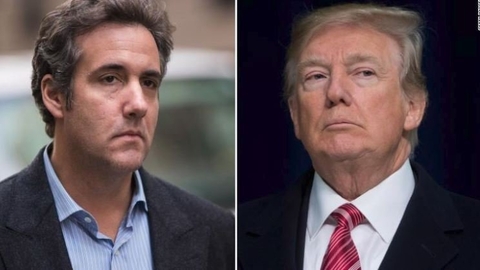 President Donald Trump continued working to fortify himself against accusations of legal misdeeds on Thursday, defending himself on Twitter in the dark morning hours and telling an interviewer he'd done nothing wrong.

But as the swirl of legal questions continues to mount, neither the President nor his aides have been able to quell the fallout.

Trump's latest attempt came in a friendly taped interview with Fox News, which was conducted on Wednesday but aired a day later. Trump sought to put distance between himself and his former lawyer Michael Cohen, who admitted to campaign finance crimes in federal court on Tuesday and implicated the President by saying he'd directed the action.

And he sharply decried those who testify against former confidants to ease legal troubles, bemoaning the longstanding practice.

"It's called flipping and it almost ought to be illegal," Trump said in the interview, adding he's witnessed similar scenarios over his decades in public life. "I know all about flipping, 30, 40 years I have been watching flippers. Everything is wonderful and then they get 10 years in jail and they flip on whoever the next highest one is or as high as you can go."

Suspects cooperating with prosecutors in exchange for a reduced sentence is a central feature of the criminal justice system, but Trump has long valued loyalty over legal precedent or practice.

Cohen pleaded guilty to myriad financial crimes this week in federal court in Manhattan, including campaign finance violations involving his attempt to buy the silence of women who claim they had sexual affairs with Trump.

"If you can say something bad about Donald Trump and you will go down to two years or three years, which is the deal he made, in all fairness to him, most people are going to do that," Trump said of Cohen, who he described as only a "part-time" lawyer. "And I have seen it many times. I have had many friends involved in this stuff. It's called flipping and it almost ought to be illegal."

While the President was aware for weeks of the possible damage Cohen could do in his dealings with federal prosecutors, Trump did not know until Tuesday afternoon that he would be so explicitly implicated in the campaign finance charges.

He sought to downplay the seriousness of the charges on Thursday, saying incorrectly they weren't actual crimes. Campaign law requires the disclosure of campaign donations and limits their size.

"What Michael Cohen pled to weren't crimes," Trump told Fox News, suggesting Cohen accepted a plea deal on the campaign finance violations because the other crimes he admitted to were more serious.

"He made a great deal. He was in another business totally unrelated to me where I guess there was fraud involved," Trump said.