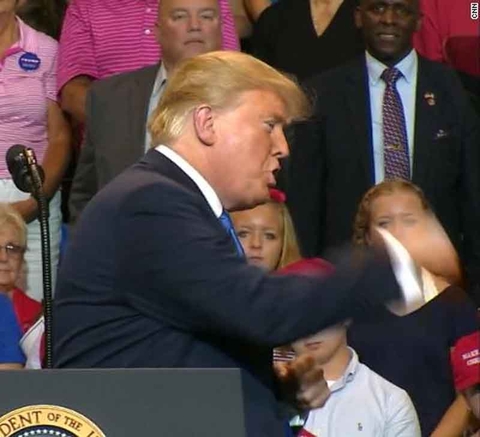 President Trump speaks at a rally in Pennsylvania. CNN video.

During the rally in Pennsylvania on Thursday, Trump did not mention allegations of interference or attacks on the US democratic process.

"In Helsinki, I had a great meeting with Putin," Trump said. "We discussed everything. ... We got along really well. By the way, that's a good thing, not a bad thing. Now we're being hindered by the Russian hoax -- it's a hoax, OK?"

Earlier on Thursday, key members of Trump's national security team had appeared in the White House briefing room to warn that Russia was continuing its efforts to interfere in the US political system, saying Trump had directed them to make countering election interference a top priority.

"We continue to see a pervasive messaging campaign by Russia to try to weaken and divide the United States," Director of National Intelligence Dan Coats said.

Trump said the "Russian hoax" is holding up his approach to Russia, and he lashed out at the media, which he said unfairly maligned last month's meeting. At that meeting, Trump declined to accept the US intelligence community's conclusion that Russia had attempted to influence the 2016 election in his favor and pointed to Putin's denial. Trump followed up that comment after much criticism, saying he had meant to say he saw no reason why it "wouldn't" be Russia behind the effort but had instead said "would."

He also claimed on Thursday that Russia was "very unhappy" he had won the election, although at his joint news conference with Putin, the Russian leader said he had wanted Trump to win.

Trump said that based on the reports of his summit, people wanted him "to go up and have a boxing match" with Putin.

"Whatever happened to diplomacy?" he said.

Trump further said it was wrong to call him "soft" on Russia when during that same trip abroad, he raised the issue of Germany buying energy from Russia.