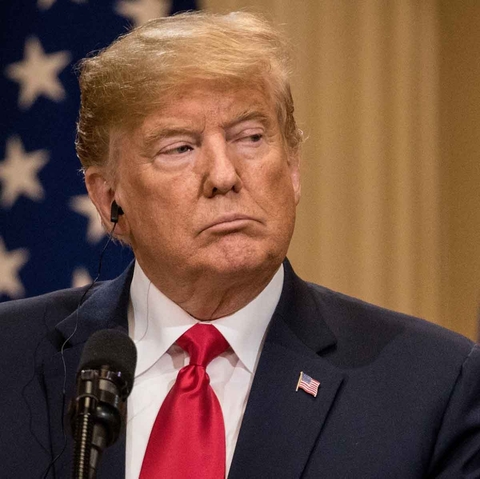 President Donald Trump issued a furious, all-caps challenge to the Iranian regime late Sunday night, warning that any threats to the US would be met with unspecified dire consequences.

The tirade signaled an immediate escalation of tensions between Washington and Tehran, and capped a weekend of angry tweets by the President on the Russia investigation and the legal problems facing his former personal attorney, Michael Cohen.

"To Iranian President Rouhani: NEVER, EVER THREATEN THE UNITED STATES AGAIN OR YOU WILL SUFFER CONSEQUENCES THE LIKES OF WHICH FEW THROUGHOUT HISTORY HAVE EVER SUFFERED BEFORE," Trump tweeted after returning to the White House from a weekend at his golf resort in Bedminster, New Jersey. "WE ARE NO LONGER A COUNTRY THAT WILL STAND FOR YOUR DEMENTED WORDS OF VIOLENCE & DEATH. BE CAUTIOUS!"

Trump's comments were apparently a response to earlier remarks by Iran's President Hassan Rouhani, who warned the US that war with Tehran would be the "mother of all wars."

Rouhani warned Trump not to "play with the lion's tail, because you will regret it eternally." He also held out the possibility of a peaceful relationship with the US, in remarks reported by Iranian state media.

Even before Trump's tweet, his administration had already intensified the rhetoric against the regime.

In a blistering speech earlier Sunday evening, US Secretary of State Mike Pompeo likened the Iranian regime to the mafia, accusing the clerics that rule the country of enriching themselves and funding terrorism at the expense of ordinary Iranians.

"To the regime, prosperity, security, and freedom for the Iranian people are acceptable casualties in the march to fulfill the Revolution," Pompeo said in remarks delivered at the Ronald Reagan National Library in Simi Valley, California.

"The level of corruption and wealth among regime leaders shows that Iran is run by something that resembles the mafia more than a government."

Among the most startling allegations leveled by Pompeo, who was CIA director before becoming secretary of state, was that Iranian Supreme Leader Ali Khamenei has a personal hedge fund worth $95 billion.

Trump's broadside against Rouhani had echoes of his approach to North Korean leader Kim Jong Un, whom he taunted and threatened on social media before agreeing to a summit.

Yet even by Trump's standards, the language was harsh, and surprised many Middle East watchers.

"We've seen a lot of very bellicose words from Mr. Trump in the past, but this tweet ... I think it takes it to a new level," said CNN military analyst Rick Francona.

"This seems to be a little out of character and really a little alarming for many people," said Francona, a former US Air Force intelligence officer who worked in the Middle East and retired as a lieutenant colonel. "This is really dangerous."

Trump came into office vowing to take a hard line on Iran and scrap the Obama-negotiated nuclear deal of 2015, a promise he fulfilled in May.

The agreement forced Iran to curtail its uranium enrichment capacity to prevent it developing nuclear weapons, and imposed stringent verification processes, in exchange for relief on crippling sanctions.

One of Trump's many criticisms of the accord, known as the Joint Comprehensive Plan of Action (JCPOA), was that it did not do enough to stop Iran from funding extremist groups throughout the Middle East.

The other signatories to the deal have vowed to stand by it.

For its part, Iran has shown no signs of reneging on the deal, motivated by the benefits of sanctions relief. But Washington is preparing to reimpose some of the punishing sanctions that brought Iran to the table in the first place.

"Right now, the United States is undertaking a diplomatic and financial pressure campaign to cut off the funds that the regime uses to enrich itself and support death and destruction," Pompeo said Sunday.

"We are asking every nation who is sick and tired of the Islamic Republic's destructive behavior to join our pressure campaign."