Trump's risky move of trying to dismantle Obamacare during the pandemic 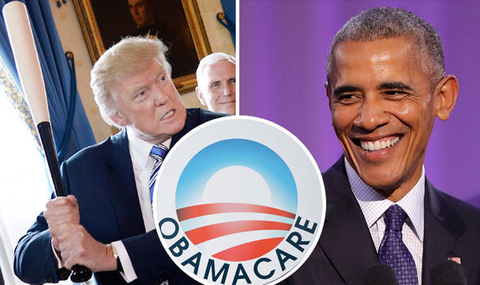 President Donald Trump attempts to dismantle the Affordable Care Act in the midst of a pandemic. File photos.

President Donald Trump has made many questionable decisions in recent weeks as he looks ahead to his increasingly difficult reelection campaign. But his administration's decision to forge ahead with its effort to invalidate the Affordable Care Act through the courts may go down as the decision that carried the most risk for Republicans up and down the ballot in 2020.

The GOP has been fighting to eviscerate Obamacare since it was passed a decade ago. But the effort to strip Americans of health care has never appeared more out of touch and tone deaf than it has during a pandemic, when more than 125,000 Americans have died, more than 2.4 million have been infected and many have lost their employer-sponsored health insurance in the waves of layoffs that have decimated the economy.

The US broke its record for new daily coronavirus cases on Thursday -- the same day the Justice Department filed its brief with the Supreme Court -- and on Friday, it shattered the record again with more than 40,000 cases reported, according to Johns Hopkins data.

Just in April and May alone, nearly half a million Americans sought coverage through a special enrollment period that allowed Americans who experienced life changes or lost coverage as a result of the coronavirus crisis to apply for coverage under the ACA, according to a Department of Health and Human Services report released this week.

The political risk for Republicans in barreling ahead to abolish the 2010 health care law was clear both in the quiet way that the administration proceeded with its late-night filing -- which was accompanied by little fanfare at a time when the health of Americans has never seemed more fragile -- and in the way Democrats seized on the GOP's move as Joe Biden aimed to make protecting the law a centerpiece of his fall campaign.

Democrats are confident that they have history on their side. In an election memo from the Democratic campaign committees in May, party officials noted that the party "experienced tremendous electoral success in '17, '18 and '19 by running on health care" and argued that "Republicans at all levels own this lawsuit's attack on Americans' health care."

Democrats in House and Senate races vowed on Friday to make health care an issue and tried to tie their GOP opponents to efforts to dismantle the law -- a tactic Democrats used against GOP incumbents in the 2018 midterms regardless of whether they voted to repeal it.

Maine Sen. Susan Collins, a Republican facing one of the toughest reelection races in the country, criticized the administration's decision to file the brief this week. Her aides noted that she sent a letter to Attorney General William Barr in May of 2019 urging him to defend the health care law, and she said in a statement Friday that the Trump administration came to the wrong conclusion about congressional intent when members included the individual mandate repeal in the tax law.

"The Administration's decision to submit this new brief is the wrong policy at the worst possible time as our nation is in the midst of a pandemic," she said of the new filing in a statement Friday. "The Affordable Care Act remains the law of the land, and it is the Department of Justice's duty to defend it."

Priorities USA Action, a major Democratic super PAC supporting Biden, immediately aired a television ad in Wisconsin, Pennsylvania and Michigan arguing that the President is "failing on health care," by highlighting both the impact of the pandemic and the administration's effort to nullify the ACA.

The Priorities' ad highlighted Trump's May 6 vow to do away with the Affordable Care Act. "Obamacare is a disaster, but we've run it very well and we've made it barely acceptable," Trump told reporters in the Oval Office during an event that day, calling it "lousy health care."

"What we want to do is terminate it and give great health care," he said.

Trump lashed out at Obamacare again on Saturday in a tweet, calling it "a joke" and adding, "Deductible is far too high and the overall cost is ridiculous. My Administration has gone out of its way to manage OC much better than previous, but it is still no good."

Biden excoriated the President and the administration for trying to terminate the Affordable Care Act during his health care-focused speech Thursday in Lancaster, Pennsylvania. On Friday alone, his campaign held at least three events focused on his plans to expand the Affordable Care Act and detailed how the evisceration of the act would affect struggling Americans, particularly Black Americans.

Though Americans are still divided over the 2010 law, concerns about health care consistently rank as one of the top issues for voters, and swing voters in particular, according to polling by the Kaiser Family Foundation.

But because of the pandemic, health care more broadly has taken on outsized importance this year as Americans worry about how they or their loved ones will handle coronavirus infections and pay medical bills. Compounding the GOP's difficulty in tackling the health care issue, Americans are giving Trump increasingly poor marks for his handling of the coronavirus crisis with significantly more Americans saying they trust Biden over Trump to handle the pandemic.

A new Pew poll this week showed a sharp partisan divide over whether the worst of the coronavirus outbreak is yet to come with 61% of Republicans and Republican-leaners stating that it's behind us, and only 23% of Democrats and Democratic leaners saying the same.

Though Trump has made mask-wearing into a political issue, the new Pew poll this week suggests he's on the wrong side of it. More than 70% of Americans said masks should be worn in public places most of the time.

The disagreements over how far to go in attempting to squash the Affordable Care Act in the middle of an election year have occurred even within the ranks of top Trump administration officials, as CNN has reported.

But there was no hedging in the administration's position this week. Solicitor General Noel J. Francisco argued that now that Congress has eliminated the ACA's individual tax penalty on those who failed to purchase health insurance, "it necessarily follows that the rest of the ACA must also fall."

The White House has generally sided with the group of Republican state attorneys general, led by Texas, who are advocating to strike down the law, while a group of Democratic attorneys general, led by California, and the House of Representatives are defending the law. The Supreme Court has said it will hear the case in its next term, and a decision isn't expected until after the November election.

House Speaker Nancy Pelosi called the administration's move "an act of unfathomable cruelty" in the midst of the coronavirus crisis.

On the campaign trail in Pennsylvania on Thursday, ahead of the administration's court filing, Biden argued that Trump was attempting to rip health care away from 23 million Americans, calling the effort "cruel," "heartless" and "callous."

And Biden went a step further by tying the potential effect of the court filing to the medical complications that many Covid-19 patients could face in the future.

"If Donald Trump prevails in court, insurers would be allowed once again to strip away coverage, jack up premiums, simply because of the battle they survived, fighting coronavirus," Biden said.

The former vice president argued that those coronavirus survivors would live their lives "caught in a vise" between Trump's "twin legacies: his failure to protect the American people from the coronavirus, and his heartless crusade to take health care protections away from American families."