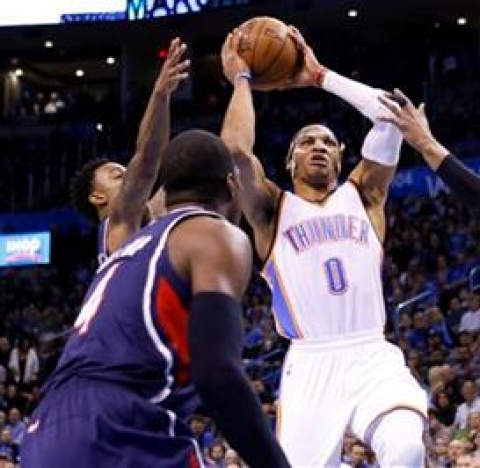 Hours after Oklahoma City learned it might be without reigning MVP Kevin Durant for the rest of the season, Russell Westbrook had yet another triple-double and scored 17 of his 36 points in the fourth quarter to help the Thunder defeat the Atlanta Hawks 123-115 on Friday night.

The update on Durant's right foot came during the same week the Thunder found out forward Serge Ibaka might also be out for the season with a knee injury. Big man Enes Kanter also missed Friday's game with a sprained left ankle.

In the midst of it all, the Thunder became just the fourth team in NBA history to go from nine games under .500 to nine games over .500 in the same season.

"It's not healthy for the head coach to go through all these injuries," Brooks said. "But our team's going to continue to rally around each other and help each other fight through it."

Westbrook's 10 rebounds and 14 assists gave him his seventh triple-double since the All-Star break, his ninth of the season and the 17th of his career.

He also made all 17 of his free throws, the most without a miss by any player in the league this season. He has made 36 free throws the past two games. According to STATS, that's the most by any player in back-to-back games since Durant made 41 combined on Jan. 18 and Jan. 20, 2013.

Dion Waiters matched a season high with 26 points, Anthony Morrow scored 12 of his 21 in the fourth quarter and Steven Adams had 12 points and 16 rebounds for Oklahoma City.

Three of Westbrook's four assists in the final period went to Morrow for 3-pointers. Westbrook balanced finding ways to score with finding his teammates, which has been a struggle for him at times.

Pero Antic scored a career-high 22 points and Dennis Schroder added 21 for the Eastern Conference-leading Hawks, who were blown out by Western Conference leader Golden State on Wednesday. The Hawks won three of the first four on their road trip before dropping the final two.

"Not the way we wanted to finish the road trip, but we have a chance to go home now," forward Al Horford said.

The Hawks shot 58 percent in the first half and led 68-61 at the break. Antic matched his career high of 18 points before halftime, and Schroder added 12. Westbrook had 19 points, seven assists and six rebounds in the first half.

Atlanta extended its lead to 12 early in the third quarter, but a 7-0 run by the Thunder trimmed the Hawks' lead to 81-76. Atlanta still led 95-90 heading into the fourth.

Back-to-back 3-pointers by Morrow cut Atlanta's lead to 103-102 with just over seven minutes to play, and a 3 by Westbrook tied it at 105. On Oklahoma City's next possession, Westbrook found Morrow for his third 3-pointer of the quarter to finally put the Thunder ahead.

Morrow hit yet another 3 with just over four minutes to play, and the Thunder remained in control from there.

Westbrook was pleased with his team's ability to close.

"It is great, man," Westbrook said. "It is a great feeling. Everything was clicking on both sides of the floor."

Hawks: F Kyle Korver missed his third straight game with a broken nose. ... Former Thunder G Thabo Sefolosha, now with the Hawks, sat out with a right calf strain. The crowd cheered loudly when he was shown on the big screen. ... Atlanta shot 50 percent.

Thunder forward Nick Collison, pressed into playing more minutes than usual because Ibaka and Kanter were out, scored 13 points, his second-highest total of the season. He shot made 6 of 9 and had five rebounds and three assists in 24 minutes. He was in a boot and on crutches after the game after sustaining a high ankle sprain on his left foot.