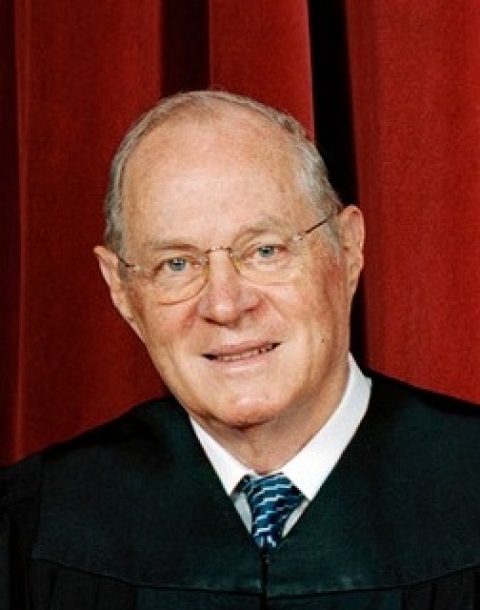 Justice Anthony Kennedy is often a swing vote on the US Supreme Court. Official photo.

WASHINGTON (AP) — Three U.S. states and three countries have approved same-sex unions just in the two months since the Supreme Court heard arguments over gay marriage, raising questions about how the developments might affect the justices' consideration of the issue.

In particular, close observers on both sides of the gay marriage divide are wondering whether Justice Anthony Kennedy's view could be decisive since he often has been the swing vote on the high court.

It is always possible that Justice Kennedy is reading the newspapers and is impressed with the progress," said Michael Klarman, a Harvard University law professor and author of a recent book on the gay marriage fight.

In earlier cases on gay rights and the death penalty, Kennedy has cited the importance of changing practices, both nationally and around the world.

The court is expected to rule by late June in two cases involving same-sex marriage. One is a challenge to California's voter-approved Proposition 8 that defines marriage as the union of a man and a woman. The other seeks to strike down a portion of the federal Defense of Marriage Act that denies to legally married same-sex couples a range of benefits that generally are available to married heterosexuals.

The justices took an initial vote in the days after hearing arguments in the two cases in late March. The senior justice on the winning side and the senior justice in dissent assigned opinions based on those votes. But while that first vote is important, it is not the end of the process; justices' assessments of a case can shift subtly or, in some cases, dramatically.

In 1992, Kennedy initially drew the assignment to write a majority opinion for five justices allowing prayers at public school graduations. In the end, he ended up writing the opinion for a different five-justice majority striking down the graduation prayers. According to several accounts, Kennedy simply changed his mind during the writing process.

Current events also can find their way into opinions. Last year, Justice Antonin Scalia's fiery dissent from a court ruling that watered down Arizona's crackdown on immigration included a reference to comments President Barack Obama made at a news conference that took place between the argument in the case in April and the announcement of the decision in June.

There is no way to know at this point whether anything similar will happen in the gay marriage cases, either of which could be decided on technical legal grounds that would say little about the court's view of the issue. But there has been no shortage of action.

In a 10-day span earlier this month, lawmakers in Delaware, Minnesota and Rhode Island gave final approval to bills to legalize same-sex marriages. Minnesota was the last of the three to act, on May 13, and when Gov. Mark Dayton signed the bill into law the following day, Minnesota became the 12th state, plus the District of Columbia, to approve same-sex unions. The other nine are: Connecticut, Iowa, Maine, Maryland, Massachusetts, New Hampshire, New York, Vermont and Washington.

And further change could come soon. The Illinois Senate has approved a gay marriage bill that now is pending in the state House in advance of the May 31 end of the legislative session. Gov. Pat Quinn has said he would sign it.

In Great Britain, a bill to legalize same-sex weddings in England and Wales easily cleared the House of Commons and will be debated in the House of Lords beginning in July.

Both sides in the high court gay marriage debate say the recent events reinforce arguments they made to the court in March.

Defenders of limiting marriage to heterosexuals say the justices need only look at the change in marriage laws to see that there is no reason for them to step in and declare a national rule in favor of gay marriage that would upend constitutional bans in 30 states and laws prohibiting same-sex unions in roughly half a dozen others.

"These developments provide yet further evidence...that the claim that gays and lesbians are politically powerless and that the courts therefore have some special role in subjecting classifications affecting them to strict scrutiny is baseless," said Ed Whelan, an opponent of same-sex marriage who is president of the Ethics and Public Policy Center.

Jim Campbell, a lawyer for Alliance Defending Freedom, said the court should not short-circuit a vigorous national debate.

"The vast majority of the states have decided to retain the traditional view of marriage that has existed throughout Western civilization. This decision belongs to the people and should be decided by the people," Campbell said.

Mary Bonauto, the director of the Civil Rights Project at Gay and Lesbian Advocates and Defenders, said the assessment of the political clout of gays and lesbians is misleading. The number of states allowing same-sex weddings has doubled in less than a year and now represents 18 percent of the U.S. population. If Illinois joins in and the court were to affirm a lower court decision that struck down the California ban, just over a third of the population would live in 14 states and the District of Columbia where gay marriage would be legal.

That's not nearly enough, especially in the context of a decades-long struggle by gays and lesbians to win the right to marry, Bonauto said. "These states moving in the direction of marriage is a far cry from all states doing it," she said.

"It is absolutely true that the political process continues to work and it is working with extraordinary rapidity," he said. By some estimates, in roughly 10 years majorities in all but a handful of Southern states will favor gay marriage.

"The only argument against this position is, what about the gay couple in Mississippi?" Klarman said, pointing to a state where the prohibition on same-sex unions is likely to endure.

The same argument could have been made, and was, during the court's deliberations over the Brown v. Board of Education case that outlawed segregation in public schools, he said.

Justice Stanley Reed, a Southerner, suggested that the court "let things play themselves out," although he eventually joined in the unanimous opinion in Brown.

During argument in the California case, Kennedy strongly suggested that he was not about to give gay marriage proponents what they are asking for, a decision that would allow same-sex couples to wed everywhere in the United States.

But Klarman wonders whether Kennedy might consider his legacy and the fact that at 76 years old, he might not be on the court for the next big gay marriage case. "He knows that today, he can write the opinion that would be the Brown of the gay rights movement," Klarman said.