Katya Zamolodchikova and Trixie Mattel had a very good year on season 7 of RuPaul’s Drag Race, at least in the boost to their careers.

Trixie was touted as an early front-runner on the show, but was eliminated in episode 4.

She returned in episode 8, and was eliminated again in episode 10. Despite that, she is considered one of Drag Race’s major breakout stars, along with fellow contestant Katya.

Katya finished fifth in the show, was eliminated in episode 11, but was voted Miss Congeniality by fans in the reunion special.

The duo teamed up to produce a YouTube series called UNHhhh, which now has more than 50 episodes.

Trixie and Katya are now getting their own show on Viceland. It premieres on November 15, according to the channel’s website. It bills the show as a “hilarious hybrid of late-night, daytime and advice shows”.

On UNHhhh, their tagline was “Welcome to UNHhhh, the show where we talk about whatever we want because it’s our show and not yours.” 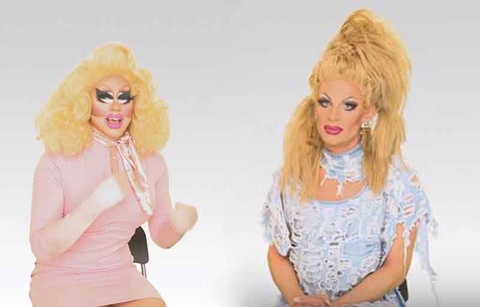 Trixie (left) and Katya in a YouTube preview of their new show. Photo provided.

“In the YouTube series you see us do a stream of consciousness improv comedy for seven minutes, but now we have 22 minutes so we do stuff out of drag, we do sketch comedy, green screen, we have guests. We do whatever,” Trixie told Decider at RuPaul’s DragCon.

“Judging from the trailer it looks like UNHhhh on steroids, with a bigger budget and even more time for Trixie and Katya’s craziness,” said NewNextNow.com.

A preview of the show is widely available online. It has hilarious banter and visuals, and fans are eating it up!

From the buzz online about The Trixie and Katya Show, it looks like fans are eagerly awaiting the November 15 show.