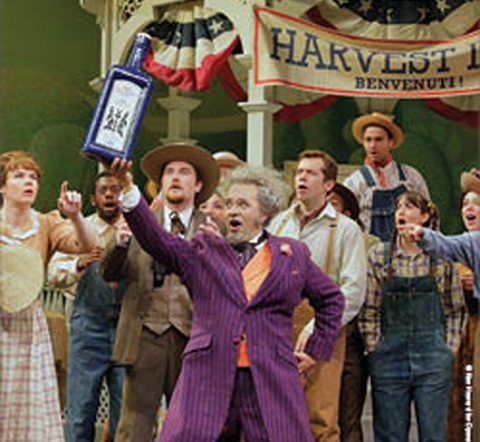 The Elixir Of Love, the tale of a boy, a girl and a love potion, has been reimagined by the Lyric Opera of Kansas City. Photo provided.

Donizetti’s bel canto comedy The Elixir Of Love is a lively, charming tale of a boy, a girl and a love potion. The setting has been reimagined by the Lyric Opera of Kansas City as early 20th-century America in a style reminiscent of Kansas City painter Thomas Hart Benton.

Upright and slightly naïve Nemorino is infatuated with beautiful and slightly fickle Adina, who in turn is in the sights of the calculating and slightly devious Sergeant Belcore. Enter snake-oil salesman Dr. Dulcamara, a cheap bottle of wine (or two) and you have a fun and whimsical romp.

A beguiling tonic of passion and humor, The Elixir of Love features exhilarating duets as well as the wildly romantic aria, Una furtiva lagrima (A furtive tear), which will leave you enchanted.

“If a measure of an opera composer’s significance were number of operas that are part of the ‘standard repertoire,’ says the Lyric Opera website, “then Gaetano Donizetti would be considered one of the leading such composers of all time, one of six or seven to have three or more works in that category (the others being Mozart, Verdi, Wagner, Puccini, Richard Strauss, and possibly Rossini). Though he was once considered the weak link among the big three bel canto (beautiful singing) composers, Donizetti’s fame has grown during the last half century.”

The Elixir of Love is sung in Italian with English titles, and is appropriate for children 7+.

Performances are March 12, 16, 18 and 20 at the Kauffman Center in Kansas City. Tickets are range from $9 to $179 and can be purchased online at KCOpera.org, and at the Kaufmann Center Box office.

Theatregoers can learn the basics about the opera, details about the composer and some inspiration behind the updated theme, in an “At Ease” lecture on The Elixir of Love, on March 7. The Kansas City Lyric Opera Guild presents the award-winning At Ease With Opera lecture series. All programs are FREE to attend. Feel free to dress casually and please arrive early to guarantee a seat. Programs are held at the Kauffman Foundation at 4801 Rockhill Road, Kansas City, MO 64110 unless otherwise noted.