“No Extra Pieces” in Tulsa 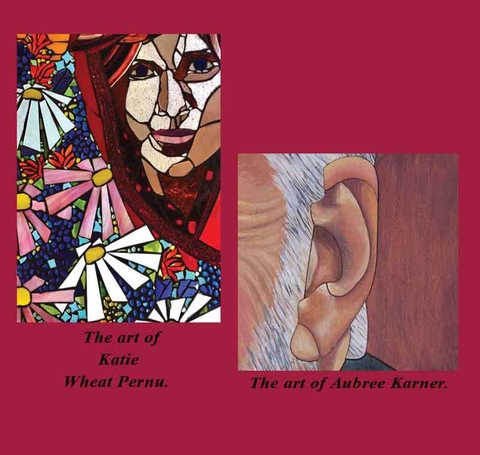 The April Oklahomans for Equality (OkEq) showcase and exhibit of local artists will feature a combined show titled No Extra Pieces, featuring the works of Aubree Karner and Katie Wheat Pernu. The show will begin with a reception on Thursday, April 4 from 6-9 p.m. The display will continue throughout the month at the Dennis R. Neill Equality Center in Tulsa.

Aubree Karner has lived in Oklahoma her entire life, being born and raised in Broken Arrow. From early on she was an art lover and studied it throughout her school years, including majoring in art at the University of Arkansas and receiving her BFA in 2008.

Karner has taught art in some capacity in Tulsa for many years including in museum summer camps at both the Philbrook and Gilcrease Museums. She currently teaches high school art in Tulsa part-time while pursuing her artistic career.

This artist has always loved puzzles and the sense of satisfaction she gets upon putting in the last piece. She thinks she has a compulsion to fit things together or have them fit together perfectly. This tendency leaves her feeling anxious in today’s political climate. Nothing fits right.

Good people she has known her whole life believe things that don’t seem to line up with their values, and no one seems to be completely free of hypocrisy. It leaves her emotions raw, running the gamut from anger to sadness to confusion. While she typically creates abstract mosaics, it was important to express with this show some of the feelings she wrestles with upon seeing the daily news or arguments on social media.

Karner believes every person has a role to play whether hero or villain. Whether one is viewed as a hero or villain depends if their identity as a conservative or liberal matches the viewer’s identity. Maybe it isn’t that simple. Maybe something good can come from the work of a villain. At least that’s what Karner chooses to hope.

Katie Wheat Pernu has spent most of her life teaching others about art. She has a degree in Art Education from Northern Arizona University and achieved National Board Certification as an art teacher. For over 20 years, she was a full-time art teacher who also worked as an artist. In 2015, she embarked upon an important shift by becoming a full-time professional artist who also teaches.

Working predominantly in glass and mixed media mosaic, Pernu has recently completed a series based on ordinary people who have faced adversity with grit and guts and done amazing things. This series was prompted in large part by her sister’s courageous 13-year battle against a rare, cruel neurological illness which took her vision, her mind and finally, her life.

“All of us see what others do in tough situations, and it inspires us to persevere. Life is hard, but it is also beautiful and joyous.” This contrast that runs through the lives of all people is her current inspiration.

This show prompted a shift in focus for Pernu from the transparency of glass to its reflectivity. Pieces built within mirrors, bring you, the viewer, right into the picture. It is not an accident that so much of her work is created on vintage and antique surfaces. She is a product of a family who reused, repaired and passed down items touched by those who came before. These items bare scars as we all do but they are here, and they still work. We persevere. We keep working.

Her largest commission is housed in the administration building of Northeastern State University. Also, she had two pieces commissioned for the Paris Air Show and has many pieces based on flight, nature and spirituality installed in homes and businesses across the United States.

No Extra Pieces begins with a reception on Thursday, April 4, from 6-9 p.m. at the Dennis R. Neill Equality Center, located at 621 E. 4th Street in Downtown Tulsa. There will be a door prize at the reception with the winner receiving a piece of work from the artist. The show continues throughout April.