1400 migrant children to be detained at Fort Sill: here’s your chance to help 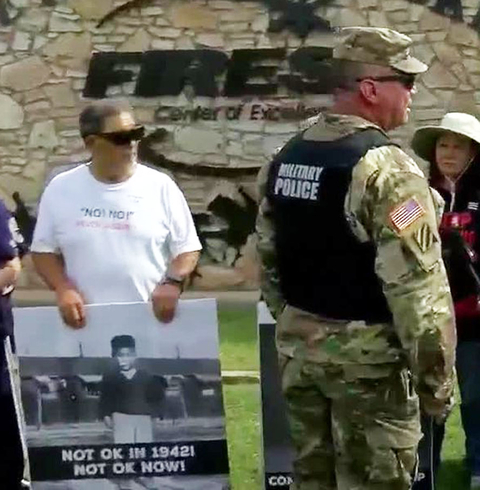 A military police officer confronts a group of Japanese American activists on Saturday protesting the government’s latest plan to house over 1,400 migrant children at Fort Sill, Okla. in a screenshot from ABC affiliate KSWO.

On June 22, a military police officer with a name tag that said Keyes told a group of peaceful protestors having a press conference to get out: “Let’s go! Now! Today!”

As Keyes ordered them to go, when the protestors asked what would happen if they did not leave, Keyes replied that he didn’t know. He said, “I’m not going to arrest you, but you need to move now.”

Michael Ishii, who helped organize the protest, then calmly said: “Then we’re not going to move.”

Ishii gave a statement that said, “I am here, a descendant, to support my elders, who have come to bear witness and to raise their collective voices in opposition to mass detention.”

This is the same camp that housed the Chiracahua Apache Tribe as prisoners of war when they were forced out of the Southwestern United States.

These 1400 children come at a time when conditions across the nation in camps are reported as unsanitary, dangerous, and inhumane.

Japanese Americans organized under Tsuru for Solidarity across the US after the Government announced plans to detain over 1400 migrant children at the military base.

Jose Rubio, deputy executive director of Dream Action Oklahoma, is reaching out: “Join us next Saturday July 20th where we will show that we will not stand by quietly while ICE and CBP terrorizes our communities, separates families and put people of color in concentration camps. We demand that Congress #CloseTheCamps #DefundsICE and #DefundsCBP. … Food and transportation will be provided.”

More information about the upcoming protest can be found at www.closethecamps.us.