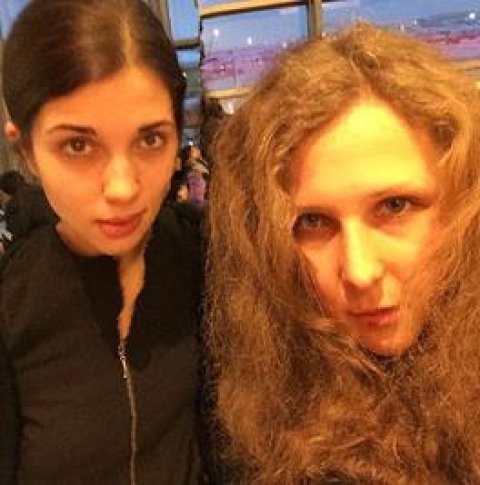 Punk Rock group Pussy Riot members Nadezhda Tolokonnikova and Maria Alyokhina. Tolokonnikova wrote while being held by police, "We are in Sochi with the goal of staging a Pussy Riot protest." VOA photo.

Sochi, Russia (AP) — A member of the punk group Pussy Riot said she and one of her bandmates were detained Tuesday while walking in downtown Sochi, the host city of the Winter Olympics.

Local activist Semyon Simonov told The Associated Press the Pussy Riot members were accused of theft and nine people were held in all.

Pussy Riot member Nadezhda Tolokonnikova wrote on Twitter that she and Maria Alekhina were stopped and accused of a crime. She said a third member of the loosely organized group also was detained.

"At the moment of detention, we were not conducting any actions, we were walking in Sochi," Tolokonnikova wrote while being held by police. "We are in Sochi with the goal of staging a Pussy Riot protest. The song is called 'Putin will teach you to love the motherland.'"

A lawyer for the group, Alexander Popkov, told the AP that police were refusing to say if the group was suspected of a crime or were witnesses. They were taken to the police station in Adler, a suburb of Sochi that is home to the Olympic Park, because a theft had been reported from the hotel where they were staying, Popkov said. No charges have been filed.

"They are in total ignorance of what is going on. They were told they were not being detained but being asked in for questioning but the police are not letting them go," Popkov said.

Pussy Riot, a performance-art collective which edits its actions into music videos, has become an international flashpoint for those who contend Vladimir Putin's government has exceeded its authority in dealing with an array of issues, notably human and gay rights.

Tolokonnikova and Alekhina served nearly two years in prison for hooliganism after Pussy Riot members performed a "punk prayer" in Moscow's main cathedral, calling on the Virgin Mary to save Russia from Putin. The conviction drew attention to Russia's crackdown on opposition during Putin's presidency.

The women said their protest performance at the cathedral was aimed at raising concern about the close ties between church and state.

Since their release under an amnesty bill in December, they have made many appearances overseas to push their campaign for improved conditions in Russia's prisons. Alekhina and Tolokonnikova recently visited the U.S. to take part in an Amnesty International concert.

On Tuesday, Tolokonnikova said authorities used "force" during the detention near the ferry terminal area where booths celebrating the Olympics have been set up. The area is about 30 kilometers (20 miles) north of the seaside Olympic venues. Tolokonnikova also said they had been detained for about 10 hours on Sunday.

Russia has put severe limitations on protests in Sochi during the Olympics, ordering that any demonstration must get approval and be held only in the neighborhood of Khosta, an area between Adler and downtown Sochi that is unlikely to be visited by outsiders.

Russia's suppression of protests has been widely denounced in the West and the Pussy Riot detentions brought renewed criticism.

"In Putin's Russia, the authorities have turned the Olympic rings - a worldwide symbol of hope and striving for the best of the human spirit - into handcuffs to shackle freedom of expression," John Dalhuisen, Europe director for Amnesty International, said in a statement.

The actions taken against Pussy Riot come a day after an Italian transgender activist and former lawmaker was detained at the Olympics. Vladimir Luxuria was stopped while carrying a rainbow flag that read in Russian: "Gay is OK." On Sunday, Luxuria said she was held by police and told not to wear clothing with slogans promoting gay rights.