2018 blue wave not a call for complacency 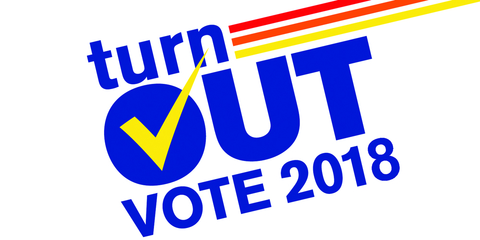 Here we are in an election year, and it looks like fired up Democrats are ready to turn out in droves. We should be; we’ve taken abuse from the current administration for far too long.

Many Dems are hoping for a “blue wave” to sweep over states and Congress this year. There are hopes of winning the House of Representatives and maybe even the Senate. We have our work cut out for us. Twenty-four states are under total GOP control. In those states, the GOP has so gerrymandered legislative and congressional districts that GOP primacy is virtually guaranteed.

All states in The Gayly region fall into that category. The percentage of Democratic members of the state legislature ranges from 23 percent in Oklahoma to 37 percent in Texas. Arkansas, Missouri and Kansas have only mid to high 20’s with 24, 28 and 30 percent respectively.

But there is hope, both nationally and in our region. Nationally, Virginia led the way in its 2017 off-year election by moving its House of Delegates from 66 Republicans and 34 Democrats, to a razor-thin margin of 51 GOP to 49 Dems. And that happened only because in one district the votes tied, requiring the drawing of lots. The Republican incumbent won the draw.

In special and general elections in 2017, Republicans were able to turn only four seats from blue to red. Democrats, on the other hand, turned 34 red seats to blue. In a leading indicator, Democrats on average rolled up 10 percent more votes than Hillary Clinton won in those districts.

It gets even better in 2018. There have already been nine special elections this year. Of the four elections in Missouri, Democrats out-polled Clinton stats by 23 points on average. One of those resulted in the election of Democrat Mike Revis, who flipped a red seat to blue by rolling up 31 points higher than Clinton’s 2016 numbers in that district.

Nationally, in 2018, Dems are doing 27 points better than the 2016 presidential election.

In our region, in addition to Mike Revis’ win in the Show Me State, there was a stunner in Oklahoma. In a special Senate election in District 37, Allison Ikley-Freeman, both a newcomer and openly lesbian, took a Republican seat. The district has 10,000 more Republican voters than Democrats, but Ikley-Freeman won handily.

Also in Oklahoma, in 2017 special elections, Dems flipped four seats – two each in the House and Senate – from red to blue.

Why is this happening? I think the credit goes to women. Donald Trump’s election created a lot of anger. Women and men turned out by the millions the day after his inauguration to protest him. Fueled by revelations of many men in politics and business charged with allegations of sexual misconduct, millions again turned out in January for marches all over the country.

Many of the new delegates to the Virginia House are women. Emily’s list, an organization which works to elect pro-choice Democratic women, says since the 2016 election, 30,000 women have inquired about running for office. In 2015, there were only 900 inquiries. They have trained over 9,000 women and raised over $500 million for their candidates.

Why is this important? The success of the Republicans stems from their Tea Party-driven wave in 2010, electing hundreds of their party. Then, using the 2010 census, they created unfair legislative and congressional districts which have reliably elected Republicans and shut out Democrats since.

The next census is 2020. We need to position ourselves to redistrict to fair, competitive districts in every state. The only way to do that is to turn red seats to blue. The wave looks real.

But the fact remains; it is up to each of us to make this change happen. Word of a “blue wave” is not a call for complacency. We must get out and vote.

Columns
blue wave
democrats
vote blue
get out and vote