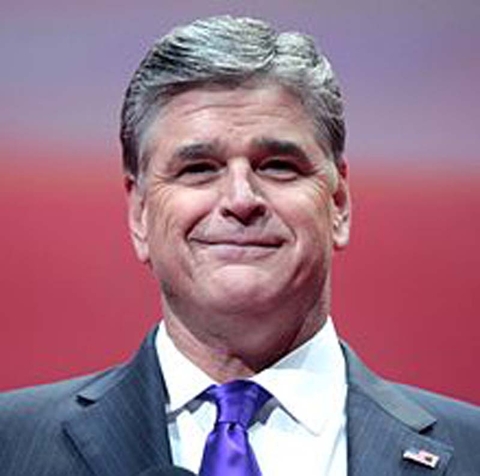 Faced with faltering poll numbers and a huge furor caused by allegations made in John Bolton's soon-to-be-released memoir of his time in the White House, President Donald Trump retreated to the warm embrace of Fox News on Wednesday night.

In a phone interview with Sean Hannity, Trump railed against his opponents -- real and imagined -- while also painting an alternate reality of his current political situation. He was aided and abetted in that world-building by Hannity, the most loyal of Trump's media foot soldiers.

Below, the lines from the interview you need to see.

1. "We did tremendous opportunity, if you look at the opportunities we have given everybody."

I think I did tremendous opportunity one time. Woke up the next morning and didn't remember a thing. And away we go!

3. "We had almost 160 million people working. Nobody has been close."

4. "The previous administration did nothing."

5. "And they love their country. And they don't want to make any mistakes. But they're under siege. There's no question about that."

Trump suggests here that the reason -- or, at least a reason -- for the series of violent reactions by police toward African American men is because police are "under siege." No agency at all for their actions.

6. "And whether it's the cams, you know, the dash cam and the body cam, which is a camera, basically, very sophisticated camera, and other thing."

So a body camera is, uh, a camera? I was not aware of that!

This is a classic Trump-ism. He's talking specifically here about police reform but he could be talking about any sort of policy with this quote. Lots of stuff is happening. He can't remember exactly what. But it's a lot. And it's happening.

Congressional Democratic leadership has been very careful not to embrace defunding the police, preferring to work on re-allocating some funds for more community-based policing programs. Trump, of course, doesn't care about that. He wants the political points.

"No, I don't support defunding the police." -- Joe Biden

Trump made this same attack against Hillary Clinton in 2016, playing on the fears of his base that electing a Democrat as president would lead to a massive roundup of guns. Clinton didn't support getting rid of the 2nd Amendment or any sort of national gun collection program. Neither does Biden.

11. "And many other things, you won't have that you would like to have."

So, if Democrats win the White House I won't have "Cherry Garcia" ice cream anymore? Those maniacs!

12. "I watched that. I couldn't really watch it for that long a period of time. It was over eight minutes. And who could -- who could watch that?"

In which the President of the United States acknowledges he couldn't and/or didn't watch the video of the death of George Floyd while in police custody. One could argue that it is the responsibility of a President to watch that horror so as to properly grasp why so many of his constituents are so angry and upset.

13. "The event that took place yesterday was -- I thought it was a terrible situation, but you can't resist a police officer. And if you have a disagreement, you have to take it up after the fact. It was a very sad, very, very sad thing."

Trump is referring here to the death of Rayshard Brooks last week in Atlanta. Brooks was shot and killed by a police officer after he grabbed one of the officers' tasers and fired it back over his shoulder while attempting to run away. The officer who fired his gun was charged with felony murder on Wednesday. And the President of the United States' take on it is "you can't resist a police officer."

14. "And today and just got a report that the police officer's lawyer said that he heard a sound like a gun, like a gunshot. And he saw a flash in front of him. So, that's an interesting -- you know, I don't know that I would have necessarily believed that."

The President is now floating something that the officer's lawyer has floated -- that he saw a flash before firing. He is doing so on the same day that the officer was charged with murder.

Again, classic Trump here. Take an allegation, push it to the public and then walk away.

Again, reminder: The President is saying this on the day that the officer was charged with felony murder in the killing of Rayshard Brooks.

17. "But, again, you can't resist a police officer like that. And they ended up in a very terrible disagreement."

Charged with murder. On Wednesday.

18. "I said, Joe didn't make that statement. And Joe doesn't even know the statement was made. But they are leaving him there."

This is part of a longer-term effort by Trump to suggest that former Vice President Joe Biden is totally out of it, lacking the mental capacity to hold the job he is running for.

19. "If you look back a few months to an economy that was the greatest of all time, everything we had was at records, every -- every -- no matter whether it's unemployment, whether it's the stock market."

The claim that Trump built the best economy in the history of the country is one of his most often-repeated claims. And it's never been true.

Ten states saw a record number of coronavirus cases this week. Twenty three states are seeing their number of cases go up.

21. "The protests -- I mean, the protesters and anarchists and terrorists and looters and all of the people that were marching on various locations over the last couple of weeks, that's died down."

Lumping peaceful protesters in with "anarchists and terrorists and looters" is deeply irresponsible by anyone. When the President of the United States does it, well, it's just plain awful.

22. "Many of them don't even know what they're protesting, frankly."

Downplaying the cause -- and intelligence -- of the protesters? Totally normal stuff!

23. "We will be in Tulsa. You have a great mayor and you have a great governor, Governor Stitt. I spoke to him yesterday. They're so excited about it, that you have no idea."

"Do I share anxiety about having a full house at the BOK Center? Of course. As someone who is cautious by nature, I don't like to be the first to try anything. I would have loved some other city to have proven the safety of such an event already." -- Tulsa Mayor G.T. Bynum.

24. "And we have had so many sign-ups. You know, there are lines of people now, and we won't be there for three days. They have lines of people right now trying to get into the arena. I mean, they will be there."

Yes, yes they do.

25. "So, we have done a great job. We have -- we were very early to the call, as you know, because you have one person that reports it. But when we heard about it, I made the decision not to let people from China come in."

Trump, again, suggests here that his decision to suspend most travel from China in the early days of the coronavirus in the United States was some sort of massive ahead-of-the-curve moment. It was not. Also worth noting: The US now has more than 2 million coronavirus cases and more than 117,000 deaths from the virus.

26. "And it's an incredible thing. Their immune system is very strong. And so we have to get the schools open. And I'm sure they will be open. I think most of them, if people are doing the right thing, they're going to be opening up schools. You have to have it."

27. "Nobody knew that it was going to be that contagious. It's a highly contagious -- there's been nothing like this since 1917, over 100 years ago, where probably anywhere from 50 to 100 million people died."

Again this is a rewriting of history by Trump. There was ample information at the start of the coronavirus shutdown that it was very contagious.

28. "Probably ended World War I, because all the soldiers, they were -- they were so sick."

So the Spanish Flu ended World War I?

29. "Well, first of all, nobody, nobody has been tougher on Russia or China than I have, nobody even close."

Yes, it is odd that Hannity has waited this long in the interview to bring up a new book written by Trump's former national security adviser that is hugely critical of the President. Thanks for noticing!

31. "But he broke the law, very simple, I mean, as much as it's going to be broken. This is highly classified. That's the highest stage. It's highly classified information. And he did not have approval. That's come out now very loud and very strong."

Bolton's representatives said he worked closely with the National Security Council on a long review process prior to the publication of the book. But according to Trump, Bolton broke the law "as much as it's going to be broken." And, no, I do not know what that means.

32. "Look, he was a great rookie. And his second year was great. And then, after that, he started going downhill rather rapidly. And then he was out of football. And then he started suing everybody."

This feels like a bit of oversimplification of Colin Kaepernick's career.

33. "And I was surprised at Roger, Roger Goodell, that he would have done what he did and made the statement that he made. Nobody was even asking for it."

Goodell, the NFL commissioner, came out earlier this month and said the NFL had been in error by not addressing player concerns over racism sooner and more seriously. So, Trump thinks Goodell shouldn't have done that?

34. "We're -- we're in great shape to put out the -- I used to call them the embers or the flames. They flare up in certain areas a little bit. But I think we will put them out very quickly."

All the right moves, you say?

36. "China should have -- China should have kept it where it was. They could have easily stopped it. They either lost control. They either suffered great incompetence. Something happened, or -- I don't know -- the worst thing would be is if they knew this was going to happen, because, other than just, tonight, I heard and yesterday, they -- it hit Beijing, to a certain extent."

In which Trump floats, with no proof, that China purposely released the virus or knowingly allowed it to spread.

Donald Trump on whether or not he will debate Biden this fall. Yeah, this feels like a good place to end.