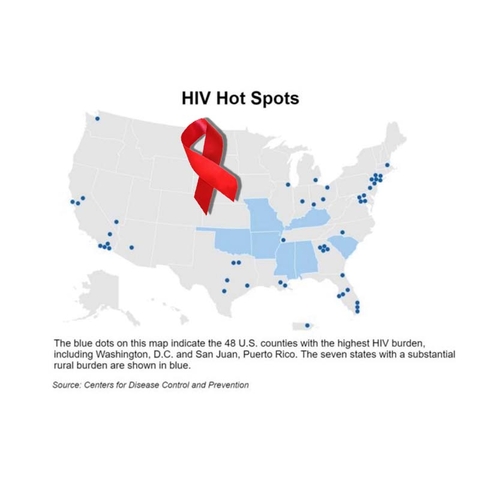 Arkansas, Missouri, Oklahoma among states with the highest HIV rates

Earlier this year, the U.S. Department of Health and Human Services detailed its new initiative to reduce new human immunodeficiency virus infections in the United States by at least 90 percent over 10 years.

In March of this year, Surgeon General Dr. Jerome M. Adams highlighted four key elements of the HIV program -- diagnose, treat, protect and respond in more detail than previously outlined. The program will focus on the 48 counties with the highest HIV rates, as well as seven states with high HIV rates in rural areas, as well as Washington, DC, and San Juan, Puerto Rico. The states are Alabama, Arkansas, Kentucky, Mississippi, Missouri, Oklahoma and South Carolina.

"HIV has cost America too much for too long," Adams said at a news conference on Monday. He described two successful medical tools that will be key to the program: antiretroviral therapy (ART), which can prevent transmission of HIV, and pre-exposure prophylaxis (PrEP), which can prevent transmission of HIV to those at risk of acquiring the infection.

"With these medical tools, if we can identify everyone infected and at risk, we could theoretically end the epidemic today," said Adams.

Yet both treatments are already in use throughout the United States. How, then, is HIV being spread?

Most new infections are transmitted by just 40 percent of people infected with HIV -- those who either have not been diagnosed or have been diagnosed but are not yet receiving care, according to a Vital Signs report, conducted by the US Center for Disease Control and Prevention.

Yet the majority of people taking antiretroviral therapy can achieve viral suppression within six months of starting the therapy. And, if HIV-positive people maintain suppression by continuing ART, they can live long, healthy lives while effectively posing no risk of infecting sexual partners, according to the authors of the report.

"Today, treatment regimens are simpler than those prescribed in the past, sometimes requiring only single-tablet formulations, with fewer side effects," wrote the authors. "Despite the availability of effective treatment, many of the 1.1 million persons with HIV infection in the United States are not effectively treated."

Just 40 percent of people with HIV transmit most new infections

The CDC scientists constructed a model to estimate the relationship between transmission and treatment rates during 2016. Modeling data that included sexual and needle-sharing behavior the researchers analyzed the proportion of new transmissions by specific groups.

Overall, about 15 percent of people with HIV have an undiagnosed infection, while nearly a quarter (roughly 23 percent) are diagnosed yet not receiving care, according to the researchers. Slightly more than 1 in 10 people living with HIV (11 percent) are receiving care but are not completely suppressed.

"Going forward, increasing the percentage of persons with HIV infection who have achieved viral suppression and do not transmit HIV will be critical for ending the HIV epidemic in the United States," wrote the authors.

Ahnalee Brincks, an assistant professor of epidemiology and biostatistics at Michigan State University, said this report "highlights a critical, but not widely known, element of HIV prevention, which is that viral load suppression among individuals who have HIV can prevent transmission."

Brincks, who was not involved in the new research, added that "significant barriers" to receiving and continuing care exist. These can "severely inhibit" the ability of health care providers "to reach a goal of 100 percent viral suppression," she said.

"Stigma, discrimination and lack of trust in the medical system" are all barriers to engagement in care and viral load suppression, she has found in her own research (conducted with colleagues). "In particular, our work suggests that higher levels of mistrust toward the primary HIV care provider is associated with longer, and less optimal, time elapses between medical appointments, which is further associated with higher viral load."

He noted that by increasing access to testing and treatment, we can prevent the "lion's share" of new infections.

"A goal that once seemed impossible is now within our reach," he said.