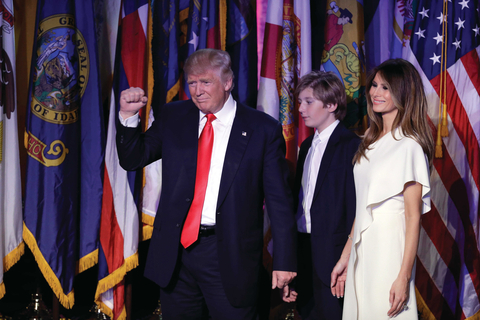 President-elect Donald Trump at his victory rally with his wife Melania and their son Barron . AP Photo, John Locher.

I stood in line November 8 and voted. Since I live in Oklahoma, and am a Democrat, I pondered if it is worth it. Almost nobody that I vote for in my home state wins. In fact, in the 13 presidential elections I’ve voted in, I’ve only voted for the winner four times – twice for Bill Clinton, and twice for Barack Obama.

But it is worth it, because you have a voice in the outcome. In many countries in our troubled world, the people have no voice at all in who governs them. Here, we have that voice.

One of my earliest memories is walking with my father, who was totally blind, to our neighborhood polling place. It was nothing fancy, just a garage with a place to mark your ballot. If it was cold, they had a kerosene heater to keep voters and officials a little warm.

As I got older, the officials let me mark the ballot for my father. It was an honor that I have never forgotten. And one of the most important lessons in life that I learned: If you are a citizen, it is your duty to vote.

Another important lesson was, if you live in the United States, it is your duty to accept the results. In the turmoil leading up to the election, it was unclear whether either side would accept the results if the other side won. I’ve seen some interesting elections in my time.

Two were most notable for me. My first election was 1968, and I was a die-hard Hubert Humphrey fan. It is one of my greatest regrets in life that he didn’t win, because I think many things would be different today if he had. But I accepted that Richard Nixon won.

My other was my second election in 1972. I couldn’t bring myself to vote for either George McGovern or Nixon. Since Minnesota has pretty open ballot access, I had 12 other choices, and picked one of them as a protest vote. Nixon won, and resigned two years later. I accepted both events.

This year’s election is certainly joining that list of notables. I accept that Donald Trump won the election. I wish him and our country the best.

Our government was designed by people with far more wisdom than I have. The mechanics of our government are the result of many compromises between large states and small, between North and South, between conservatives and liberals.

It seems awkward at times. I had a European ask me, after the 2000 election, why it was that the person who had the most votes didn’t win. I told her that many of us were wondering that as well – but I knew the answer. It was because our system worked. When we have disputes, we resort to the courts. The Supreme Court decided that recounts would stop and George W. Bush would be President.

I didn’t like the outcome but I accepted the results. And that’s the way it should work.