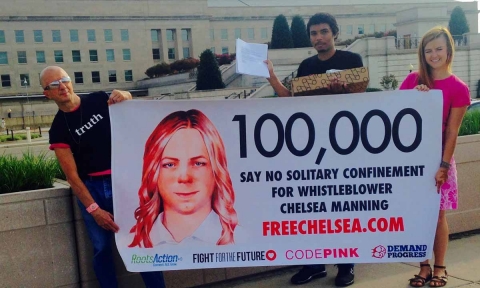 Chelsea Manning is being denied treatment for gender dysphoria in her prison barracks. AP photo.

Whistleblower Chelsea Manning is currently serving a 35-year prison sentence in Ft. Leavenworth, Kansas, at the United States Disciplinary Barracks. Her crime is her violation of the Espionage Act, but the last five years in prison have introduced a new crime in the eyes of the army – gender dysphoria. Her punishment is to be withheld treatment without any medical basis.

As part of the American Civil Liberties Union, Crystal Cooper is assisting Manning in her lawsuit against the Department of Defense (Manning v. Hagel). This fight is to provide Manning with proper treatment for her transition.

On November 10, 2015, the Department of Justice filed a brief to dismiss Manning’s case, further withholding her treatment – “including permission to follow female hair length and grooming regulations – for Chelsea’s ‘own good,’” Cooper reminds us.

“The move to throw Chelsea’s case out came after the ACLU and co-counsel filed an amended complaint on October 5 following the government’s continued denial of her request to follow female standards for hair length in September. Officials had already agreed to treat Chelsea with the hormone therapy, speech therapy, and cosmetics recommended by her providers at Ft. Leavenworth months prior,” explains Cooper.

The government’s motion to dismiss Ms. Manning’s case would hold back her plea for recommended treatment tremendously.

“Chelsea continues to await constitutionally adequate treatment over five years after her arrest. Though the government attempts to diminish and complicate the issues, our brief makes the straightforward case that the government cannot deny her treatment or her right to equal protection solely because she is transgender and seeking treatment for her gender dysphoria.”

Without necessary treatment, gender dysphoria can cause a number of debilitating psychological distresses. Transgender individuals are prone to extreme anxiety, self-hatred, and suicidal tendencies. Providing treatment to prisoners who suffer from gender dysphoria must be included in the regulated care standards set by the United States Disciplinary Barracks, similarly to the standards for federal prisons.