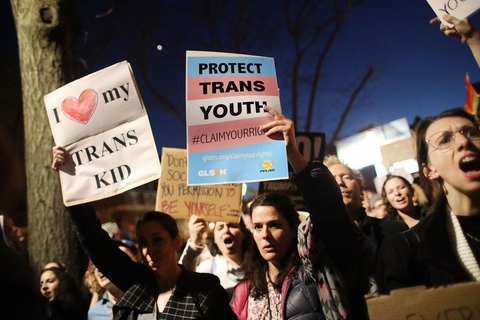 The nation's leading civil rights organizations said in a letter addressed to state education officials charged with civil rights protection that schools must allow students to access restrooms in line with their stated gender identity, as the guidance had called for.

The Trump administration withdrew the guidance in February, saying the bathroom controversy was a matter for the states, not the federal government, to decide. The decision caused an outcry among LGBT+ advocates, who say students may now face discrimination and harassment.

In their letter, 50 groups expressed concern that rescinding the guidance might lead some schools to believe that transgender students are not entitled to use the bathrooms of their choice. "That is simply not the case," the letter said.

The organizations, which included Public Justice, the National Women's Law Center, Lambda and others, warned that denying students that right would violate federal law and the Constitution.

"And when schools fail to comply with the law, they will continue to be subjected to lawsuits filed by and on behalf of aggrieved students," the groups wrote.

The Education Department did not immediately respond to a request for comment.

Chris Minnich, executive director of the Council of Chief States School Officers, said his organization did not oppose Obama's guidance, but added that such disputes should indeed be resolved at the local level.

"These decisions need to be made between states and school districts. It's not so much a single decision that a state can make," Minnich said. "Every kid in those schools needs to feel welcome."
_