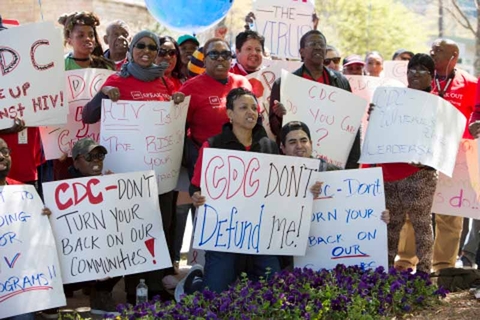 Atlanta - AID Atlanta, which has been providing HIV/AIDS-related services, care, and education since its inception in 1982, engaging Black and Latino populations to meet the evolving needs of Atlanta’s diverse communities, has filed a federal lawsuit against the Centers for Disease Control and Prevention ( CDC ) after the CDC arbitrarily defunded AID Atlanta, a respected longtime AIDS service provider, by the denial of renewal of a CDC grant for AID Atlanta’s contract to provide HIV testing and other services. The CDC’s action now threatens the delivery of HIV testing and prevention services to vulnerable, underserved, largely minority populations throughout Atlanta.

Nearly a hundred community activists joined AIDS Healthcare Foundation & AID Atlanta to protest the Centers for Disease Control's decision to defund community based HIV service organizations working in communities of color on Friday April 7th, 2017. They rallied in front of the CDC's main offices in Atlanta.

In its lawsuit, filed Thursday, May 11, 2017 in the United States District Court for the District of Columbia, ( Case # 1:17-cv-00872 ), AID Atlanta filed motions for Declaratory Judgment, Damages and Injunctive Relief against the CDC. AID Atlanta is seeking the court’s intervention to overturn the denial of CDC grant awards for the 2017/2018 grant year.

AID Atlanta asserts in its lawsuit that the CDC, “…mismanaged a critical funding opportunity and impermissibly denied funding to a long-standing partner fighting HIV/AIDS in the Atlanta, Georgia area. Plaintiff AID Atlanta, Inc. (AID Atlanta) was a victim of an arbitrary and capricious funding process that will result in thousands of fewer HIV tests being performed in Atlanta and that will only worsen an ongoing public health crisis among minorities in that community.”

“Since 2004, the CDC has awarded AID Atlanta at least five long-term cooperative agreements for HIV prevention programs through which we provided HIV testing, education, and prevention services to the most vulnerable populations in a region disproportionately affected by the HIV/AIDS epidemic pursuant to a series of cooperative agreements with the CDC,” said Nicole Roebuck,  Executive Director, AID Atlanta.  “Most recently, AID Atlanta acted as a trusted and highly regarded partner with the CDC under a six-year agreement, operating HIV prevention projects targeting young men of color who have sex with men. At no time during this period has the CDC expressed any concerns or criticisms of AID Atlanta’s HIV prevention programs or its abilities to manage such programs and federal resources. We are quite frankly perplexed by the CDC’s actions here.”

As the specific six-year cooperative agreement with the CDC moved toward an expiration date of March 31, 2017, it was replaced by a new funding opportunity announcement released September 2016. AID Atlanta applied for funding, hosted site visits by CDC officials as part of the application process, but was ultimately denied renewal of its HIV prevention and testing services contract.

“Through this lawsuit and by other actions, we will vigorously advocate to restore this funding to AID Atlanta in order to continue to provide these critical services to the clients and patients AID Atlanta serves,” added Roebuck.

Failure to renew AID Atlanta’s contract for HIV testing and prevention services comes at a time when the influx of new HIV/AIDS diagnosis is on the rise in Atlanta. Current statistics released by the CDC indicate the metro Atlanta area ranks 5 th in the nation for reported new HIV infection cases, and the city’s HIV/AIDS epidemic has been compared to the epidemic in some third world African countries.

“While the Trump administration continues to finalize appointments in all federal agencies, including the CDC, Dr. Jonathan Mermin, the current director of CDC's National Center for HIV/AIDS, Viral Hepatitis, STD and TB Prevention, remains at fault for making bureaucratic decisions to de-fund agencies that have an exemplary record of shifting the trajectory of the HIV/AIDS epidemic and positively impacting those targeted communities most impacted by the current HIV epidemic, including African-American gay and bisexual men,” stated Michael Kahane, AIDS Healthcare Foundation Southern Bureau Chief.

In its lawsuit, AID Atlanta asserts that:

The application AID Atlanta submitted in response to CDC’s Notice of Funding Opportunity PS17-1704 proposed the continuation of a highly successful program targeted toward HIV prevention services for young men of color who have sex with men and their partners regardless of age, gender, and race/ethnicity.AID Atlanta has been operating substantially similar programs under CDC cooperative agreements since at least 2004 and will continue to provide other, similar HIV prevention programs pursuant to a currently ongoing agreement with CDC. Notwithstanding AID Atlanta’s extensive experience and long-standing relationship with CDC, Defendants denied funding to AID Atlanta under PS17-1704.Defendants acted arbitrarily, capriciously, and contrary to law in violation of the Administrative Procedure Act by denying AID Atlanta funding under Funding Opportunity Announcement PS17-1704.As a result, AID Atlanta is asking the Court to:

A. Declare Defendants’ denial of AID Atlanta’s application to provide services under Funding Opportunity Announcement PS17-1704 to be in violation of the Administrative Procedure Act.

Current HIV stats in Atlanta, according to the CDC:

Atlanta ranks #5 in the nation in terms of new HIV diagnosis1 out of 2 gay black men are living with HIVThe metro-Atlanta region accounts for more than 60% of HIV cases in Georgia.

About AID Atlanta: AID Atlanta has been providing HIV/AIDS-related services, care, and education since its inception in 1982. In the face of fear and bigotry, founding members volunteered their time to provide support and education. The organization quickly expanded to engage Black and Latino populations and meet the evolving needs of our diverse community in response to the epidemic. Today, AID Atlanta offers a broad range of services and has grown to be the most comprehensive AIDS service organization in the Southeast. The mission of AID Atlanta is to reduce new HIV infections and improve the quality of life of its members and the community by breaking barriers and building community. https://www.aidatlanta.org