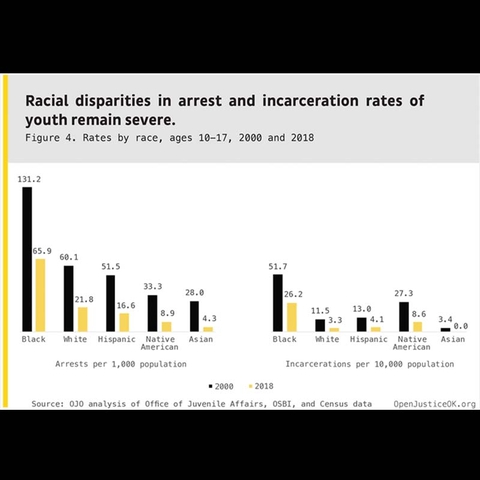 Our juvenile justice system is failing youth of color. Today’s youth are committing fewer crimes, and fewer youths are being arrested, but there are still differences in how they are treated based on their race and where they live.

The justice system will continue to be unfair to people of color unless lawmakers take deliberate steps to fix it.

There are also major differences in how often juveniles are arrested between counties. Arrest rates for juveniles are six times higher in Pottawatomie County than in bordering Seminole County. The most staggering discrepancy in arrest rates is for Kay County, which has juvenile arrest rates five times the state average.

We can’t fully comprehend the disparities Oklahomans of color face without acknowledging our state’s history. From forced resettlement of American Indians to the Greenwood race massacre, the effects of our past are still present.

Oklahomans of color generally make less money, have unequal access to quality education and medical care, and are more likely to live in communities that lack resources. Black youth in Oklahoma are nearly six times more likely, and Native American youth are two times as likely to live in concentrated poverty — neighborhoods where 30 percent or more of the population lives in poverty — compared to white youth.

Ripple effects of these disparities traumatize our youth, rip apart families, and devastate communities. Disparities in arrest rates for youth of color are particularly high within rural communities. And just as in the adult system, people working within the juvenile justice system hold a great amount of decision-making power.

Causes of racial and local disparities within Oklahoma’s juvenile justice system are historical, complex, and cannot be solved overnight. But if we fail to acknowledge our faults and begin to make progress towards solutions, we are failing our children and our state.

When people are treated differently based on their race or geography, we all suffer. The economic and emotional costs of incarceration for families within our state are devastating, even more so for families of color.

Progress cannot be made without data-driven conversations about race. To reduce racial disparity in juvenile justice, all youth-serving agencies need to incorporate a racial equity lens into every aspect of their work. Only then can progress be made towards a system that is truly just for all Oklahomans.