American cardinal says his own mother is 'embarrassed to be Catholic' 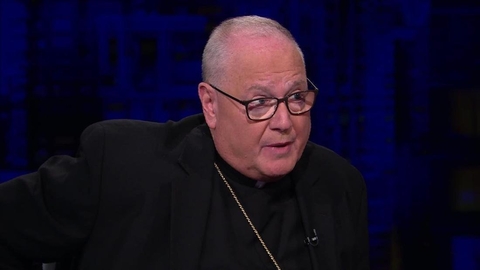 His own mother is 'embarrassed to be Catholic.’ Photo by CNN.

You know the scandals in the Catholic Church are bad when a leading American cardinal says his own mother is ashamed to show her faith in public.

"You don't think that did me in?" said Dolan, often one of the more cheery American churchmen.

"When my mom says -- she's in assisted living -- she said: I'm not going out for lunch, I'm kind of embarrassed to be Catholic."

"Boy, when your own mom is saying that..." Dolan said, trailing off.

Dolan's comments came as Pope Francis and American Catholic leaders are struggling to deal with a rapidly escalating and morally disastrous series of scandals that center on sexual abuse by clergy and coverups by bishops.

On Thursday,  the Pope convened an emergency, closed-door meeting with a contingent of American church leaders to discuss the scandals and ways to prevent them from reoccurring.

One of those leaders, Cardinal Daniel DiNardo, president of the U.S. Conference of Catholic Bishops, has himself been recently accused of mishandling a clergy abuse claim according to documents from police in Texas.

Last week, Dolan's own New York diocese was one of eight in the state to receive a subpoena from the state's attorney general, who has convened a civil probe into how the church leaders handled clergy abuse allegations. In the interview with Amanpour, Dolan addressed that inquiry as well as several other pressing topics in the church.

But, as Dolan notes, the Catholic abuse "epidemic" extends far beyond the United States, from Latin America to Europe to Australia.

Here's Dolan in his own words on some of the toughest issues facing the church.

"We have to cooperate, whether we like it or not. I think we kind of like it now. We told (New York Attorney General Barbara Underwood), thanks. Come on in. We need this. The disaster of this is such an oil spill that you've mentioned, beginning with the victims and their families.

"If I don't have the trust of my people, I have nothing. The church is based on trust, it's not based on coercion. So that bothers me. One of the ways we might be able to get it back: Ask the outside experts. We bishops in New York, we wrote and said, 'Come on in. How can we help? Anything you want, go ahead.'

"Since 2002, I keep bringing that date up. Because that's when the bishops, I'd like to propose, began to get their act together and did some very good things. We have been cooperating with ... the district attorney. There's ten of them here. We got a pretty good track record of working with them, provide any document that they want. You do know, any time we get an accusation, I had to learn this the hard way. Since 2002, the second person that knows it after us is the D.A. We say, 'Here. This is for you. We can't judge it. We can't decide if its credible.'"

On the Catholic Church's 'epidemic' of abuse

"This summer has been anything but a church picnic for us. It's been a disaster, one crisis after another. And as I try my best to listen to people, I hear them express very eloquently frustration, bewilderment, anger, confusion. You name it, they got it.

"I'm feeling the same way. I get angry as well. That priests could do this. That brother bishops would be so negligent and not responding properly. That our people are suffering and most of all -- most of all -- that these victims are. And they, think of what this summer has been for them. Even those that may have come forward decades ago, like many of them did. Maybe things have just begun to heal and now they're hearing all this again.

"The (Archbishop Theodore) McCarrick affair, the Pennsylvania grand jury repot...Now all the tension with the Vigano letter. Ireland, Chile, Australia, you name it. It seems to be epidemic."

On whether Cardinal Wuerl of Washington, DC, should resign

"I got to be personal -- he's a good friend and he's a tremendous leader. I kind of hope he doesn't resign. We need him. He's been a great source of reform in the past.

I trust him enough that if he thinks he needs to resign for the good of the church, he will. And I would respect that decision."

On the accusations by Archbishop Carlo Maria Vigano

"I do think we need to take Archbishop Vigano's allegations seriously. I trust the Pope very much. I think he's going to say we need to get to the bottom of this, let's look into it, let's not be rash and impetuous in answering. But I owe my people an answer to this.

And I think we'll get them. I trust the Pope."

On whether the church should change its rules on clergy celibacy

"If it needs to change, it shouldn't be just because of that reason (the clergy sex abuse crisis). There could be other good reasons to talk about a change. And I'm at peace with talking about those. To jump to the conclusion here, I don't know."