Andy Cohen says because he is gay, he cannot donate plasma 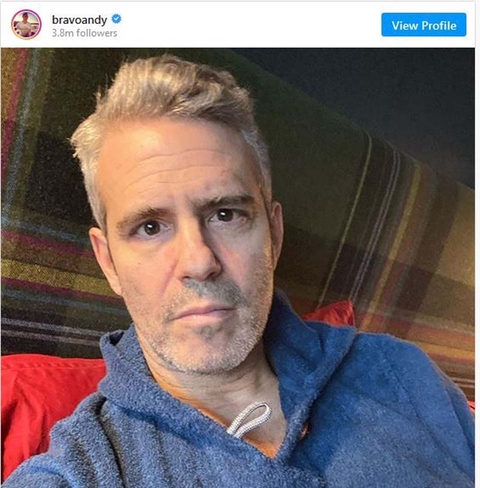 On March 20, Andy Cohen announced on Instagram that he had tested positive for coronavirus. IG photo.

In an interview on CNN this week with Anderson Cooper, Andy Cohen spoke about his experience trying to donate plasma in the wake of the pandemic.

On March 20, Cohen announced on his Instagram he had tested positive for the coronavirus.

“After a few days of self-quarantine, and not feeling great, I have tested positive for Coronavirus,” he wrote to his 3.7 million IG followers.

Cohen said he was turned away due to his sexuality.

“I signed up for a program for COVID-19 survivors where you could donate plasma, which is rich in antibodies, to those still battling the virus,” Cohen said. “I was told that due to antiquated and discriminatory guidelines by the FDA to prevent the spread of HIV, I am ineligible to donate blood because I am a gay man.”

Cooper said at present, FDA regulations require that any gay man who has had sex with another man during the past three months cannot be allowed to donate blood.

The number of people who have the antibodies is relatively small, so they are very eager to get as many people as possible to donate plasma to help others, according to Cooper.

“Exactly,” Cohen said. “I think they put out the call in early April. I immediately responded, but it took a bit for them to get back to me, and then when they did, I went through kind-of a questionnaire for me, and they said I sounded like a perfect candidate. I said to them, ‘I’m a gay man. I know that some of the rules have been relaxed because I know that gay men can’t typically give blood.”

“The new rules are relaxed so that if you have abstained from sex over the last three months any kind of sexual conduct, you can give blood.”

The guidelines were before that you had to abstain from sex with another male for a year to qualify to donate blood or blood products. Because of COVID-19 and the urgent need for donations, the guidelines were relaxed to three months of abstaining.

Cohen said that because of this, he was unable to donate his very needed plasma with antibodies.

“I understand the concerns about gay men being a higher risk or carrying HIV, but there are HIV tests that can be administered in 20 minutes,” said Cohen. “I could go take an HIV test, they could tell me in 20 minutes, and they then retest your blood, from what I understand.”

Donated blood is always tested for HIV be the donor a gay man or not.

“There could be sexually promiscuous heterosexuals who have had plenty of sex in the last three months who can go in, no questions asked, and give blood,” Cohen said. “My feeling is we’ve been asked to change our way of life because we are at war with this virus, and we’ve been able to adapt to a whole lot of things we weren’t used to, two months ago. We are wearing masks, and we’re quarantined; I think it’s time for the FDA to look at this antiquated rule and say, ‘this is ridiculous.’

“I think the plasma in my blood can absolutely help someone, or possibly cure someone.”

The laws were made when there was a huge fear about HIV/AIDS and the stigma against gay people. This was a time when gay people who were HIV positive were not allowed to come into the US, Cooper added.

Which was a law that was on the books until 2009 when President Obama ended the 22-year ban on travel to the United States by people who had tested positive for the virus that causes AIDS.

Editor’s note: A CNN video clip contributed to this story.