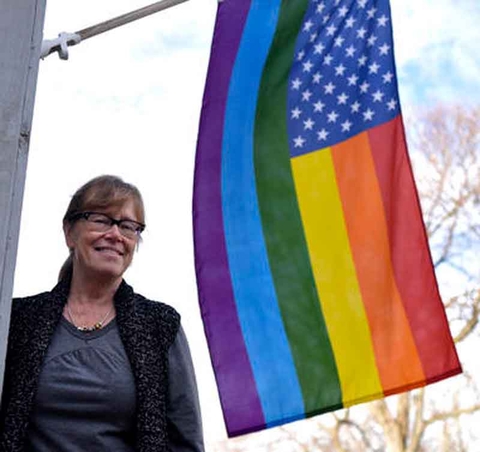 Susan Pearlman stands outside her home with a rainbow flag in Ann Arbor, Mich. Ryan Stanton, The Ann Arbor News via AP.

Ann Arbor, Mich. (AP) — A group of neighbors in Ann Arbor have united to show support for gay rights after the Nov. 8 election by flying rainbow-colored flags.

Seventeen out of 40 houses along a one-block street in south Ann Arbor are flying rainbow-colored flags.

The movement began after the election when Mark and Susan Pearlman received an anonymous letter that said the author was "deeply troubled" by the rainbow-colored flag the Pearlmans had been displaying since the Pulse Nightclub mass shooting in Orlando last June.

"And then just the day after the election, there it was — an anonymous letter in my mailbox, basically saying that they were uncomfortable with my flag," Susan Pearlman said of the handwritten note she received.

The shooting in Orlando which resulted in 49 people killed and 53 injured resonated with the Pearlmans, whose daughter is gay.

"It was just a little disconcerting," Susan Pearlman said. "There was something threatening about that. I found myself for two nights; I just kept looking out the window. Like, is someone watching me? There was no address."

Susan Pearlman talked with some of her neighbors, who decided to respond by flying similar flags.

"When we saw the note, I went online right away and got this flag," said Michael Sheffield, who has a rainbow flag in his window with a peace symbol and the word peace. "It came four days later, we put it up, and then we walked down the street and it's just speckled with flags, and it makes you feel really good."

Residents at the houses with traditional American flags did not answer the door for the newspaper on Nov. 29.

The rainbow flag was popularized as a symbol of gay pride in the 1970s, but it's also seen as a broader symbol of diversity and peace, MLive (http://bit.ly/2fJzDgU ) reported.