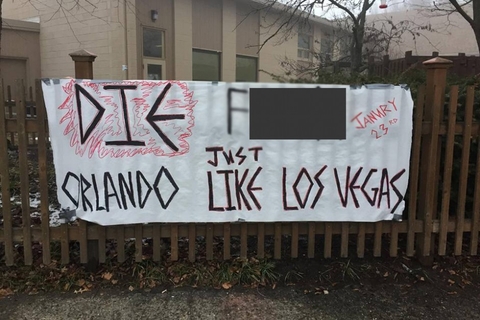 (AP) — Police are investigating after banners with racist and anti-gay messages were erected outside a northwest Indiana church known for its progressive stands on racial and social justice issues.

West Lafayette police said the banners were found Sunday attached to a fence outside the Unitarian Universalist Church in the city about 70 miles (112 kilometers) northwest of Indianapolis.

The second one also referenced singer-songwriter Jackson Browne, while the other included the date Jan. 23 and the message "die Orlando just like Los Vegas."

Browne has a concert planned for Jan. 23 in Orlando, according to his website. The other wording appears to refer to the sniper who opened fire in October from a high-rise hotel in Las Vegas, killing 58 people and injuring more than 800 others, the Journal & Courier reported.

Police Chief Jason Dombkowski said police are investigating and that the FBI has been alerted.

"This will not be tolerated in our community," Dombkowski said.

Mayor John Dennis said in a Facebook post Sunday that the city that's home to the Purdue University campus "has been and always will be an open and welcoming community."

"We will not allow our embracing of all that is right to be targeted by those who feel empowered to deliver a message of hate, violence and exclusivity," he wrote in his post.

Parishioner Suzan Windnagel told the Journal & Courier that the banners' messages "were sickening, hate-filled and threatening."

The Rev. Charlie Davis, the church's pastor, said they were taken down before most of the congregation arrived on Sunday.

"At the end of the service, I announced that the signs had been put up," Davis said.

The banners were found the morning after the church hosted a "Resistance Fair" that included left-leaning groups who oppose President Donald Trump's agenda.