Ask SCOTUS nominee whether Bible is supreme to know their stand on marriage equality, abortion 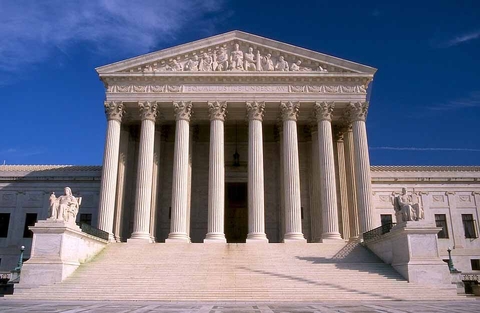 While we don't yet know the identity of Donald Trump's nominee to the US Supreme Court, media reports are clear that the front runners are alarmingly more conservative than outgoing Justice Anthony Kennedy. That is, alarming to those who don't want to see Roe v. Wade overturned, depriving women of the right to control their own bodies, and the reversal of Obergefell v. Hodges, which recognized same-sex marriage. And it's no exaggeration to say both of those rights are in peril depending on the views of the justice who replaces Kennedy.

For those like me who are gravely concerned about this possible development, the best chance we will have to get a sense of the nominee's views on these issues will be during the Senate confirmation hearings. However, as history has taught us, the nominees are well-coached to be evasive. We saw an example of this just last year with then-Supreme Court nominee Neil Gorsuch. When pressed by Senate Democrats regarding his views on whether he would vote to overturn Roe, he offered only vague answers -- such as Roe is the "precedent of the United States Supreme Court," and the "law of the land."

Expect the same from Trump's nominee this time.

Related:
Now the Supreme Court will be as polarized as the country
Plaintiff in same-sex marriage case doesn't believe Trump when he says issue is settled
What Anthony Kennedy's retirement means for abortion, same-sex marriage and more

If senators truly want to know who poses a threat to abortion rights and marriage equality, I have some suggested questions. First, ask the nominee if he or she supports or denounces the idea of making the Bible, rather than the Constitution, the supreme law of the land.

Alarmingly, we have leaders like Mike Pence, Mike Huckabee and others openly advocating for basing US laws on the Bible. You can hear it in their arguments to overturn abortion and marriage equality, which are predicated not upon public policy concerns but upon the Bible. If you doubt me, just look at the words of Vice President Mike Pence, a man who told us that he's "a Christian, a conservative and a Republican, in that order." (American didn't even make Pence's top three!)

Pence, as a member of Congress, made an impassioned speech on the House floor against marriage equality. Was his opposition to this based on the US Constitution? No, it was based on the Bible. Pence, invoking Genesis 2:24, stated, "I believe first, though, marriage should be protected because it wasn't our idea. Several millennia ago the words were written that a man should leave his father and mother and cleave to his wife and the two shall become one flesh. It was not our idea; it was God's idea."

Same goes for abortion. If the nominee follows the Biblical interpretation that life begins at conception, as articulated by people like James Dobson and is willing to impose that as the law of America, abortion rights may be left up to each state to decide. (As it stands in Planned Parenthood v. Casey, the most recent ruling on abortion, a woman has full reproductive freedom until the fetus is viable to live outside of the womb.)

And here are a few other questions that senators can ask of the nominee, such as: Do you agree with Thomas Jefferson's view that the Constitution requires "building a wall of separation between Church & State." Or even Ronald Reagan's view that "church and state are, and must remain, separate"?

Conversely, the nominee should be asked if he or she accepts or denounces the views of Christian leaders like the GOP's Mike Huckabee, who has made it crystal clear that he wants our Constitution revised to align with the values of the Bible: "What we need to do is amend the Constitution so it's in God's standards rather than trying to change God's standards so it lines up with some contemporary view."

Those who give their first allegiance to the Bible rather than to the Constitution could be said to support "Christian sharia law."

Remember when the right wing ginned up fears of Muslim Americans by claiming that they wanted to impose Islamic law in the United States, which they describe as sharia law? But there were no Muslim leaders in the US who were advocating that US should be based on the Quran. (If there were, I'd vocally oppose them.)

While there is no official book titled "sharia law," some Muslim majority nations base their state laws on Islamic principles set forth in the Quran. However, this is not an issue in the US. In fact, in a Florida state legislature debate on whether to pass a measure intended to ban Islamic law from that state, the chief GOP state senator championing the bill publicly admitted there were no Muslims pushing to impose Islamic sharia law there, but the legislation was "a preemptive gesture" akin to a "vaccination."

Let me be clear, my opposition to turning the Bible into American law is not because I'm anti-Christian or anti-religion. I'm absolutely unequivocally neither. As a Muslim, my religion and my relationship with God are very important. And I view Pence and Huckabee as representing a small, fringe percentage of the overall Christian American community.

But I strongly believe, as Jefferson did, that we need a wall between church and state. In fact, we need an amendment to the US Constitution barring laws based on any religious text -- be it the Bible, the Quran or any other religious book.

That's why our senators need to press Trump's nominee to see if he or she will reject any attempts to base our laws on the Bible. The United States of America must remain a nation where we have freedom of religion, not a nation where any one religion can be imposed upon us.