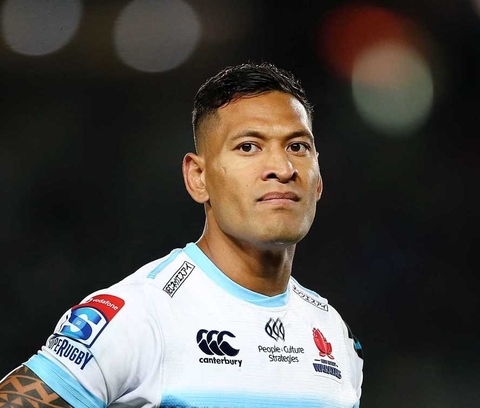 A series of "unacceptable" homophobic and transphobic social media comments posted by Australian rugby player Israel Folau are being investigated by the sport's governing body.

The 30-year-old Folau, who also plays for Australia's national team, captioned the image: "Those that are living in Sin will end up in Hell unless you repent. Jesus Christ loves you and is giving you time to turn away from your sin and come to him." He also included several Bible verses in the caption.

On Tuesday, Folau posted a transphobic reaction on social media to new legislation passed in Tasmania, which became the first Australian state to make listing gender on birth certificates optional. Those aged 16 and over can now apply to change their registered gender without the approval of their parents, while transgender people will no longer be denied official recognition of their gender until they've had surgery.

On Twitter, Folau shared a screenshot of an article about the legislation, writing: "The devil has blinded so many people in this world, REPENT and turn away from your evil ways."

"The content within the post is unacceptable. It does not represent the values of the sport and is disrespectful to members of the Rugby community," the statement continued. "The Rugby Australia Integrity Unit has been engaged on the matter tonight."

In April 2018, Folau was criticized for writing in an Instagram comment that gay people would go to hell unless they repented. All Blacks player TJ Perenara and "Thor: Ragnorok" filmmaker Taiki Waititi were among those to condemn Folau's comments on Twitter.

Welsh rugby union referee Nigel Owens, who is gay, wrote in a column for Wales Online, "When young people in particular see comments like this, and not just from our sporting stars but from anybody, it could be enough to push those people over the edge."

Folau defended his comment in a column for Players' Voice, writing that accusations of homophobia "could not be further from the truth."

The following month, Folau posted a video on Twitter of a sermon by American evangelist David Wilkerson, in which Wilkerson condemns "rampant iniquity" and "sexual perversions beyond description" as footage of activists waving rainbow flags plays.

Speaking on Fox Sports' "Kick & Chase" the same month, Rugby Australia Chief Executive Raelene Castle said of Folau's homophobic comments, "in my career this is the singularly most difficult thing I've ever had to deal with."

Castle defended Rugby Australia's decision not to sanction Folau, saying: "On one hand it's a human rights issue but on the other hand, you're dealing with freedom of speech."

"We've had conversations with Izzy about presenting his views in a respectful way," Castle said. "He is walking the line, we will continue the dialogue."

James Lolicato, CEO of Australian charity Proud2Play -- which "focuses on increasing LGBTI+ engagement in sport, exercise and active recreation" -- told CNN that Folau's latest comments "are not only demeaning to LGBTI+ people, but also are discriminatory."

"We see the negative consequences that arise from comments such as these from high-level players, be that of young LGBTI+ people feeling isolated and afraid to get involved in sport, or the modeling of these comments and behaviors in other people," Lolicato said.

"Rugby needs to look at its vilification policies and sanction Israel to show that they really are a sport for everybody," he added.

"We can no longer mask hate speech as 'free speech' and need to make sure that discrimination of all forms is properly tackled in sport."

Described as a "freak of an athlete" with "exceptional physical prowess," Folau has played 63 times for Australia. Prior to converting to rugby union, the 30-year-old played professional rugby league and Australian rules football.