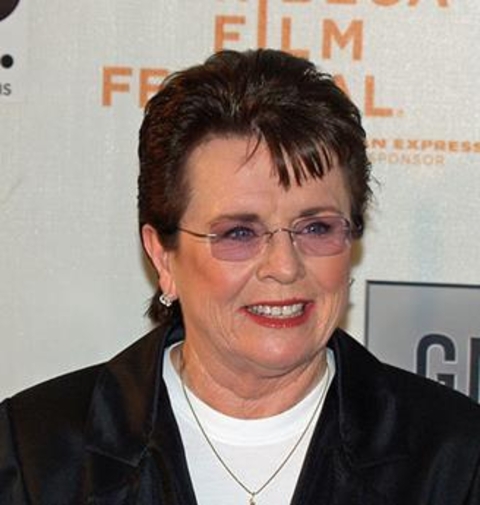 NEW YORK (AP) — The name itself struck an antagonistic tone: "Battle of the Sexes."

From Bobby Riggs' chauvinistic crowing to the entrances worthy of the Roman Colosseum, the imagery was conflict, war.

Billie Jean King prefers to remember how that tennis match "brought everybody together."

"Everybody had parties," she recalled during the U.S. Open earlier this month. "You had the fraternities and sororities having parties together. You had suburb parties where men and women were together — betting against each other, but it brought them together."

"These people are together," King added, "whether they like it or not."

Friday is the 40th anniversary of a 29-year-old woman's straight-set victory over a 55-year-old man in front of more than 30,000 fans. Often the participants in culture-tilting moments look back later and say they never realized at the time how big it would be.

Not King on Sept. 20, 1973. She knew exactly what she was getting herself into at Houston's Astrodome.

"I knew how important it was," she said. "I did know. I felt it. I knew it the moment I said yes to Bobby."

The women's movement. Title IX. The timing was perfect, and King dreaded the repercussions on those broader causes if she lost. She remembers saying then: "It's going to touch the emotions of our preconceived ideas about gender and the culture we live in."

When Serena Williams won this year's U.S. Open, she earned a total of $3.6 million in prize money — same as men's champ Rafael Nadal — and became the first woman to surpass $9 million in a season and $50 million in a career.

"The Battle of the Sexes" was the glitzy, gaudy symbol of gender equality, but 1973 marked some very concrete steps — with King right in the middle. This year is also the 40th anniversary of the founding of the Women's Tennis Association and equal prize money at the U.S. Open.

A day after her win, Williams reflected on the fight from the 1970s through the 2000s.

"It's amazing," she said. "It means so much because people like Billie Jean King and Venus who stood up to Wimbledon — 'We want equal prize money' — to all the pioneers who helped me get this paycheck. What's so beautiful about it is in 10 years, women are going to be making so much more money, it's going to be even better opportunities for females out there. It's not going to stop here."

In 1982, Martina Navratilova became the first woman to earn over $1 million in a season; two years later, she topped $2 million.

When Steffi Graf retired in 1999, she had won nearly $22 million in her career.

The WTA was founded a week before Wimbledon in 1973. King would win the women's singles and doubles and mixed doubles titles there.

"I actually played a little tennis that year," she reminded.

When the tournament started, King said, "I remember feeling happy because I knew we had the WTA. I felt lighter, happier."

By the end, she was exhausted even walking to the net to shake hands, the years of struggle weighing her down.

The battle was won. The battle goes on. Last month, ESPN aired allegations that Riggs threw the match. King called the story "ridiculous."