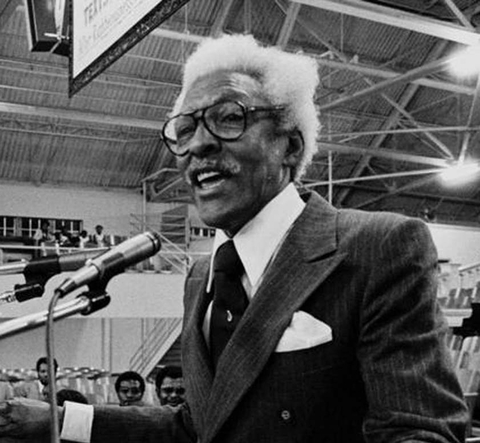 Ten years before the March on Washington in 1963, Bayard Rustin was arrested.

Rustin -- who would later go on to become one of the most prolific organizers of the civil rights movement, including as the mastermind behind the March on Washington -- wasn't booked for his activist work, however. He was arrested over his sexuality.

That January night in 1953, Rustin was having sex with another man in a parked car in Pasadena, California. He was jailed on a "morals charge," and served about two months in jail. The offense landed him on the sex offender list.

The charge cost him jobs, and though Rustin didn't necessarily hide his sexuality, it was used against him. Former Sen. Strom Thurmond, a segregationist, read Rustin's arrest record on the Senate floor and used it to delegitimize the civil rights movement, calling him a "pervert."

If that wasn't enough, the record was reportedly supplied to Thurmond by J. Edgar Hoover, who at the time was the director of the FBI.

Now, California lawmakers are attempting to right the wrong.

State Sen. Scott Wiener, chair of the California Legislative LGBTQ Caucus, joined Assemblywoman Shirley Weber, chair of the Black Caucus, on Tuesday in writing a letter to California Gov. Gavin Newsom calling for the posthumous pardon of Rustin, who died in 1987.

The letter, posted publicly to Wiener's Twitter page, explains Rustin's legacy as a civil rights icon and an LGBTQ icon and condemns California's treatment of him 67 years ago.

"Mr. Rustin's conviction and registered sex offender status haunted him for the rest of his life, and it continues to tarnish his name, despite his death thirty-three years ago," it reads. "Indeed, California's treatment of Mr. Rustin tarnishes our entire state."

At a news conference, Wiener spoke to Rustin's legacy and the discrimination he faced due to his sexuality.

"We're asking the governor to take a strong step and to send a profoundly impactful statement acknowledging that what happened to Bayard Rustin was wrong, that it was harmful, that it was a stain on the state of California," he said. "And that Bayard Rustin should be pardoned and this criminal conviction should be wiped away from his record."

Weber echoed Wiener's sentiments, saying that without Rustin, there would be no Montgomery Bus Boycott, no Selma and no March on Washington.

Though Newsom hasn't announced whether Rustin will be pardoned, he said in a statement to CNN that he will be "closely considering" the request.

"History is clear. In California and across the country, sodomy laws were used as legal tools of oppression. They were used to stigmatize and punish LGBTQ individuals and communities and warn others what harm could await them for living authentically," he said. "I thank those who are advocating for Mr. Bayard Rustin's pardon."

Beyond leading and organizing many civil rights protests, Rustin was also the main person who pushed the movement -- and Martin Luther King -- toward nonviolent ideas and tactics. Rustin studied in India for seven weeks to learn Gandhian philosophies in 1948, and he passed that teaching down to King.

Following the success of the Montgomery bus boycott in 1956, Rustin became a close confidant of King.

Rustin also played a significant role in the formation of the Southern Christian Leadership Conference, also known as SCLC.

Though former President Barack Obama awarded Rustin the Presidential Medal of Freedom in 2013, he remains much less known when compared to his Civil Rights Movement peers. Some academics argue this is due to the homophobia of the time.