The benefits of labor unions 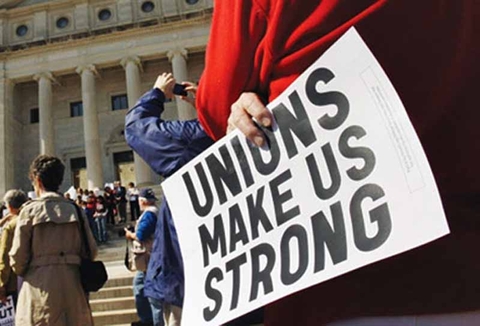 The labor movement and is dedicated to the social and economic achievements of American workers. File photo.

Most of us probably think of Labor Day as the end of summer. Many probably don’t know the reason we have a day to celebrate Labor.

According to the U.S. Department of Labor, “Labor Day, the first Monday in September, is a creation of the labor movement and is dedicated to the social and economic achievements of American workers. It constitutes a yearly national tribute to the contributions workers have made to the strength, prosperity, and well-being of our country.”

Regrettably, American workers over the last several decades have seen labor union membership decline. Fifty years ago, about one-third of all workers were members of a union. Today it is one in 10.

Part of the reason is that so many things unions fought for have now been enshrined in federal labor law, leading people to believe that there is no need to join a union. Another reason is the imposition of so-called “Right to Work” laws.

A Right to Work law guarantees that no person can be compelled, as a condition of employment, to join or not to join or to pay dues to a labor union. In other words, if you work in a right to work state and the employees form a union, you may not be fired if you decide not to join.

In addition, even if your potential new employer has a union, joining the union cannot be required, and not joining cannot prevent you from being hired.

In The Gayly’s region, Arkansas, Kansas, Oklahoma and Texas are Right to Work states. Only Missouri does not have one of these odious laws, and it’s not for lack of trying to get one passed.

Why should you care? Well, since in my past I was a proud union member and official, a few reasons come rapidly to mind. Unions won the 40 hour work week, the eight hour day, paid vacations, employer health insurance and pension plans, and a ban on child labor.

In addition, the existence of a labor union in an industry, or a community, has positive benefits for both unionized and non-unionized workers. According to the Economic Policy Institute (EPI) strong unions set a pay standard that non-union employers follow. I’ll give you an example. In the airline industry, most of the large carriers are heavily unionized. The main exception is Delta, but Delta’s workers earn at least as much, and sometimes more, than similar workers at other airlines.

Right to Work laws in the 26 states that have them have severely diluted union membership. Just as one example, in Oklahoma there are teacher unions, but membership isn’t required. That is undoubtedly a contributing factor to Oklahoma’s ranking 48th in teacher pay.

Employers looking to expand tend to look to Right to Work states, where wages are lower and the ‘hassles’ of having a union in your business are unlikely to exist.

Among those ‘hassles’ are having to treat your employees fairly, provide them with health insurance and the ability to negotiate a living wage.

So, when you’re enjoying the last day of summer on Labor Day, give some thought to the benefits organized labor has brought to your own workplace, union or not, and give a toast to the sacrifices of union members in the past who won those rights.

The Gayly and its staff do not necessarily agree with the opinions expressed in this column.