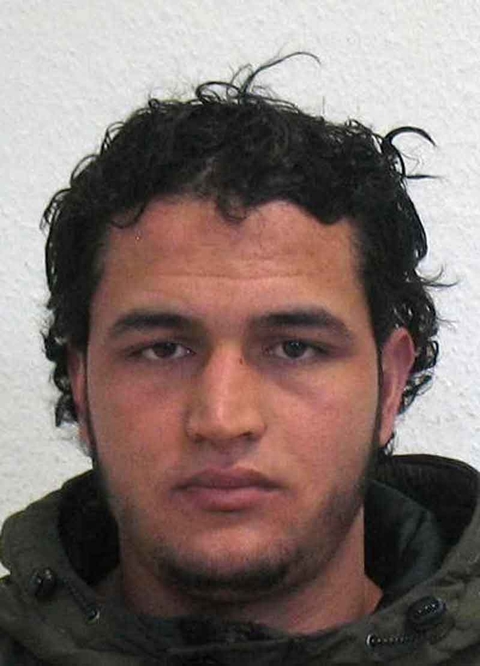 Tunisian Anis Amri who is suspected of being involved in the fatal attack on the Christmas market in Berlin was killed in Milan, Italy. Photo German police via AP.

Milan (AP) — The Tunisian man suspected of driving a truck into a crowded Christmas market in Berlin was killed early Friday in a shootout with police in Milan, ending a Europe-wide manhunt, Italy's interior minister said.

Checks conducted after the shootout showed "the person killed, without a shadow of a doubt, is Anis Amri, the suspect of the terrorist attack," Interior Minister Marco Minniti said.

The Islamic State group claimed responsibility for the Monday attack in Berlin, which killed 12 and injured 56 others.

Amri, 24, who had spent time in prison in Italy, was stopped by two officers during a routine police check in the Sesto San Giovanni neighborhood of Milan early Friday. He pulled a gun from his backpack after being asked to show his identity papers and was killed in the ensuing shootout.

One of the officers was shot and is in the hospital, but his condition is not life-threatening, Minniti said. The other officer fatally shot Amri.

German authorities said they were still awaiting official confirmation that the person killed in Milan was Amri, but German Interior Ministry spokesman Tobias Plate said "should this turn out to be true, then the Interior Ministry is relieved that this person doesn't pose a threat anymore."

It was unclear how and when Amri traveled from Berlin to Milan. German authorities issued a Europe-wide wanted notice for him on Wednesday, two days after the attack.

A Milan anti-terrorism official said Amri arrived at Milan's train station early Friday and investigators are trying to figure out where he came from.

The official, who spoke on condition of anonymity because he was not authorized to talk publicly about the investigation, said Amri made his way to the piazza outside the Sesto San Giovanni train station in a suburb of Milan, which is 7.5 kilometers (4.7 miles) away from the main train station.

The official says two police officers were suspicious because it was 3 a.m. and the station was closed. Officials are still trying to determine how he arrived at the piazza. Some buses run at that hour, but no trains, trams or metros.

The official says investigators are also working to determine what contacts, if any, Amri had in Milan. There is no evidence that he ever passed through Milan during his previous stay in Italy, where he spent time after leaving Tunisia in the wake of the 2011 Arab Spring uprisings.

He was repeatedly transferred among Sicilian prisons for bad conduct, with prison records saying he bullied inmates and tried to spark insurrections. He served 3 ½ years for setting a fire at a refugee center and making threats, among other things — but Italy apparently detected no signs that he was becoming radicalized.

His mother said he went from there to Switzerland, then moved on to Germany last year.

Authorities in Germany deemed him a potential threat long before the Berlin market attack, and even kept him under covert surveillance for six months this year.

They had been trying to deport him after his asylum application was rejected in July but were unable to do so because he lacked valid identity papers and Tunisia initially denied that he was a citizen.

Authorities say Amri has used at least six different names and three nationalities in his travels around Europe.

A spokeswoman for Chancellor Angela Merkel, Ulrike Demmer, said the German leader would speak with her Tunisian counterpart later Friday to discuss issues including the deportation of Tunisian citizens.