The best gift of all 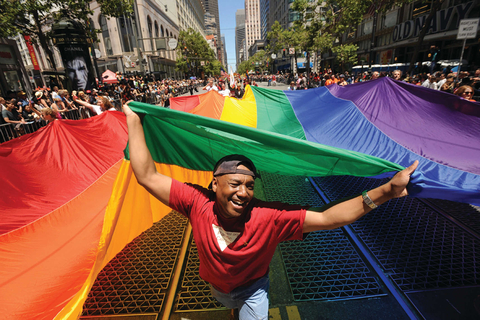 Give yourself the gift of reassurance. AP file photo.

A Trump presidency terrifies many of us, especially the LGBTQ and even more so LGBTQ POC (People of Color). We all know that the atrocities against LGBTQ POC are much greater than those who are not. But we shouldn’t fear; Trump may or may not be LGBTQ friendly. He has changed his views so many times.

The greatest gift you can give to yourself is the gift of not living in fear.

I couldn’t imagine what the lawsuits would say. It would have to be someone trying to prove that same-sex marriage somehow negatively affected their lives. Baloney! It won’t happen. And the same applies to a return of DOMA (Defense of Marriage Act).

Fear is just a tactic. Nothing can take away your pride or your marriage. You have come such a long way. Give yourself the gift of reassurance that you are ironclad. Don’t live in fear of being attacked or not kissing in public. We know that confidence is half the battle. You are the gift that keeps on giving. Every time a POC comes out of the closet it gives hopes and strength to the POC who is struggling.

I was at the fifth annual Freedom Oklahoma LGBTQ College Summit at UCO last month and there were more African Americans, both LGBTQ and straight, than at all the previous years I had attended. The allies, like me, made the proudest. They were there giving their support and learning about the issues so that they could be better allies.

The high school GSAs had many people of color. Some were identifying as queer or non-binary. Being non-binary in your gender is a rare thing, but to see a POC identifying that way was amazing. In fact, the non-binary POC color I spoke to stated that they wanted to run for political office one day.

You never know when your message has been a blessing to someone else. You are your own gift and a gift to the community. Stand proud. Don’t be afraid. And know that America is becoming more diverse by the second. We are not going backwards and we will not live in fear.

The greatest gift is the one that you can give to yourself – the gift of courage.
_