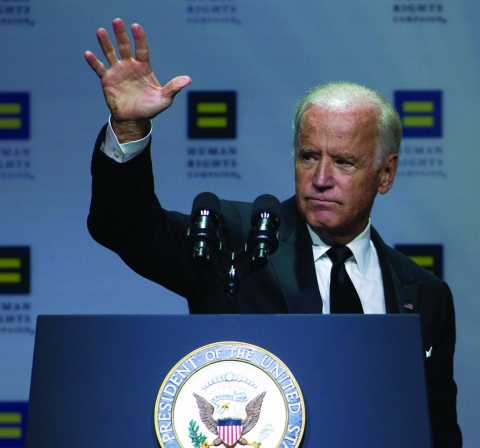 WASHINGTON (AP) — Vice President Joe Biden is throwing his unequivocal support behind letting transgender people serve openly in the U.S. military, as the Obama administration considers whether and when to lift the longstanding ban.

Biden's declaration at the Human Rights Campaign's annual dinner Saturday goes further than anything the Obama administration has said before, evoking memories of when Biden outpaced President Barack Obama in endorsing gay marriage. Although the White House says Obama supports a Pentagon review aimed at ending the transgender ban, neither Obama nor the military has said definitively that the policy will be changed.

"No longer is there any question transgender people are able to serve in the United States military," Biden told a crowd of 3,000 gay rights activists at the group's star-studded gala.

Biden, who is considering running for president, declared transgender rights to be "the civil rights issue of our time" as he delivered the keynote speech, just hours after Hillary Rodham Clinton — his top rival if he enters the race — gave a rousing address elevating LGBT rights as a main pillar of 2016 bid. Biden said gays and lesbians shouldn't fear "those shrill voices" trying to undo gay marriage and other advances because Americans "have moved so far beyond them and their appeals to prejudice and fear and homophobia."

"There's homophobes still left — most of them are running for president," Biden said, in a playful yet cutting jab at the Republican candidates he could one day face.

Transgender rights were a commanding focus at this year's gathering of the Human Rights Campaign, whose endorsement and members' support are eagerly sought in the Democratic primary. With gay marriage now law of the land nationwide, many gay rights activists have turned their attention to transgender issues, which have burst into the public spotlight only recently.

"We need to say with one voice that transgender people are valued," Clinton said to a smaller gathering Saturday morning. "They are loved, and they are us."

Defense Secretary Ash Carter has said the Pentagon's current regulations banning transgender individuals are outdated and has ordered a study aimed at formally ending one of the last gender- or sexuality-based barriers to military service. The study began in July and is slated to last six months, with an eye toward assessing any impact on the military's readiness to fight.

But the White House has avoided prejudging the outcome of the review, wary of criticism that Obama is imposing politically driven changes irrespective of the advice of his military commanders.

"They have said that they would conduct this review with a bias in favor of changing this policy," White House spokesman Josh Earnest said after the review was announced over the summer. "The president certainly supports that approach."

Biden, in his speech, left no such wiggle room.

"It's simple," the vice president said. "All Americans are qualified to serve, should be able to serve."

The vice president made no explicit reference to his pending decision about the 2016 race, which has dragged on beyond his self-imposed deadline. When an audience member interrupted with a loud shout of "you should run," Biden quickly shifted back to a story about his dad.

Biden won praise for endorsing gay marriage in 2012 ahead of Obama or Clinton, becoming the highest elected official to support the politically charged issue. This year, Clinton, Sen. Bernie Sanders and the other Democratic candidates are aggressively courting LGBT voters' support and working to outdo one another with expressions of support.

"I'm running for president to stand up for the fundamental rights of LGBT Americans," Clinton said.

Clinton had been the Human Rights Campaign's first choice to keynote the dinner, but she turned it down when she was booked on "Saturday Night Live" for the same evening. The group also asked Obama to speak, then invited Biden when Obama was unavailable.

Although Biden has enjoyed strong support from gay groups, many prominent gay Democrats have committed to Clinton, who drew loud cheers whenever her face appeared in videos played before Biden's speech. Richard Socarides, a former senior adviser to President Bill Clinton, said gay activists have a strong emotional connection to Clinton despite Biden's "special footnote in the history of our battle for marriage."

"He deserves our special thanks for that," Socarides said. "But I think we're sticking with Hillary."

by Josh Lederman, AP
Copyright 2015 The Associated Press. All rights reserved. This material may not be published, broadcast, rewritten or redistributed.