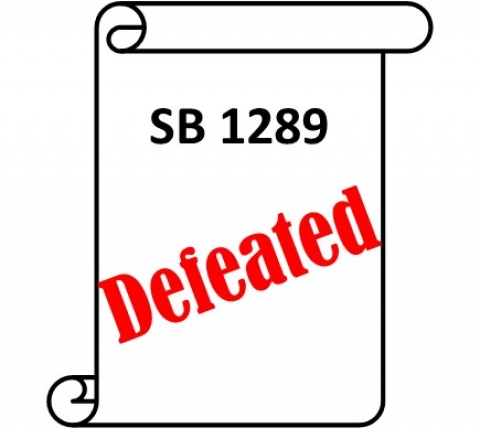 Senate Bill 1289, which would have allowed anti-LGBTQ discrimination in some Oklahoma cities, failed in committee today.

SB 1289, which would have striped local control from Oklahoma’s municipalities and counties, no longer allowing them to pass or enforce ordinances that provide stronger protections than already exist in state law was “laid over” by its author, Sen. Josh Brecheen, effectively killing it.

When a bill is laid over, it usually means that the sponsor of the legislation does not have the votes to pass the bill. According to Troy Stevenson, Executive Director of Freedom Oklahoma, there were six senators ready to vote “No” on the bill, out of nine members of the committee.

In general, laid over bills can be heard later in committee, but since the General Government committee of the Oklahoma Senate has no further meetings before a Senate deadline on February 25 requiring bills to be passed out of committee by that date, the bill is effectively dead.

“It was very clear that this committee was not going to allow this bill to pass, and the author of the bill pulled it from consideration. So, it’s not going to be heard before the legislature,” said Stevenson.

The bill would have adversely affected the LGBTQ community by stripping away protection from bias and discrimination in employment, housing, and public accommodations in Oklahoma City, Tulsa, Norman, and other jurisdictions across the state. Oklahoma does not have a statewide human rights law that protects LBGTQ people from discrimination in employment, housing or public accommodation.

Oklahoma is not the only state where right-wing legislators are trying to effectively block equal protection under the law for LGBTQ persons. Arkansas passed a similar bill last year, although Eureka Springs, Fayetteville, and Little Rock passed LGBTQ protections anyway, effectively daring the state to take action against them.

The American Independent Institute reported in 2014 that there was movement afoot in several states. “Currently, 21 states and the District of Columbia have laws that ban discrimination in housing and employment with respect to either sexual orientation or gender identity or both. In other states, it is perfectly legal to fire someone for being gay, lesbian, bisexual or transgender, or to deny them housing. As a result, many local communities have taken steps to fix that inequity through nondiscrimination ordinances of their own.

“The Human Rights Campaign estimates that more than 160 communities have enacted comprehensive anti-discrimination laws, and dozens more have enacted incomplete ordinances that leave out the transgender community or that only provide limited protections.

“But under proposals by Republicans in several states, such ordinances in Lawrence, Kans., Missoula, Mont., and Kalamazoo, Mich., would be illegal.”

Moves like this “are considered extremely bad for business, damaging the positive momentum gained in municipalities passing these protections to entice more industry to Oklahoma. As well as harming their ability to retain young people and top talent who refuse to live in an intolerant community,” said Stevenson in a press release.

“As we saw last week - when corporations in Georgia announced that they were leaving the state after a similar discriminatory measure passed the senate there – corporate America is not looking to do business in states with regressive human rights laws.”

There were more than 25 anti-LGBTQ bills proposed for consideration in the Oklahoma legislature this year. It is expected that many of them will die in committee due to legislative deadlines.

Watch The Gayly, our website www.Gayly.com, and our Facebook page (The Gayly) for continued coverage of these hateful bills, and their status.