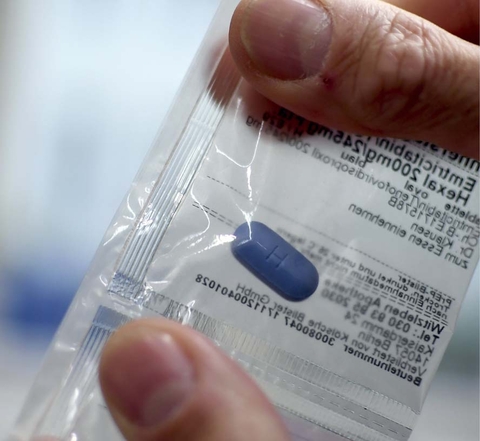 Currently, Truvada is the only medication for PrEP. AP photo.

US Sen. Kamala Harris is introducing a bill to reduce the transmission of HIV by encouraging the use of PrEP, or pre-exposure prophylaxis, a drug that's more than 92% effective in preventing new infections. If it becomes law, PrEP would be free to most patients.

There were nearly 40,000 new HIV infections in the United States in 2017, the last year of available data from the US Centers for Disease Control and Prevention. Of the 1.1 million people in the United States who could benefit from PrEP, only 7 percent filled prescriptions for it in 2016, according to the CDC.

At AID Atlanta, an HIV/AIDS care and education provider, phone lines light up with people asking about how to get access to PrEP, but not nearly as many follow through to get it.

"There is a preventative medicine for HIV, and if people would take it, it would significantly help us eradicate HIV from the country in the next 10 years, and yet it is significantly underutilized," said DeWayne Ford, AID Atlanta's director of prevention services.

Ford said he's been working in HIV prevention for 14 years and has been surprised that the people coming into his clinic with new infections are getting younger and younger. "This is getting worse, not better."

RELATED: NYC Council Speaker: “Access to PrEP is a life or death issue”

Truvada, as the drug is known commercially, was approved by the US Food and Drug Administration in 2012. In June, the US Preventive Services Task Force recommended that people at significant risk for HIV take PrEP.

Under Obamacare, most private insurance is required to cover services that get the task force's "A" rating, such as the PrEP recommendation. States with expanded Medicaid would also typically follow suit.

The CDC recommends PrEP for people who are at high risk of getting HIV through sex or injection drug use. But a 2018 study of one high-risk population -- sexually active gay and bisexual men -- showed that its use is minimal: only 4.1 percent.

Other studies show a big gap in the number of African American and Latino gay men who are taking it, despite the relatively high number of HIV diagnoses in these populations.

There is some stigma associated with the drug and a lack of awareness that it is even available, studies show, but one of the biggest barriers may be its cost.

A generic form of Truvada is expected, but for now, the cost without insurance is more than $21,000 per year: about $1,800 per month or about $60 per daily pill, according to the current price with GoodRx.

RELATED: Take the test and access PrEP during OKC Pride and Ocasio-Cortez grills Gilead CEO over cost of Truvada

The association, America's Health Insurance Plans, said in a statement to the House Oversight and Reform Committee in May that the "out-of-control prices" for Truvada are "a direct consequence of drug makers taking advantage of a broken market for their own financial gain at the expense of patients."

Doctor visits, testing and other services could still be expensive and cost prohibitive.

Harris' PrEP Access and Coverage Act would address this need specifically, requiring public and private health insurance plans to cover PrEP and the tests and visits without a copay.

It would provide financial assistance to states to give more access to PrEP to the uninsured and would prohibit life, long-term and disability insurance from denying coverage to people who take PrEP.

"PrEP is a critical advancement in the fight against HIV that can finally provide peace of mind to Americans who live in the shadow of the HIV epidemic. But for too many in our country, lack of insurance coverage and exorbitant costs have put PrEP out of reach -- and that needs to change," Harris, who is seeking the 2020 Democratic presidential nomination, said in a statement.

"We must truly commit ourselves to HIV prevention by finally requiring every health insurance plan -- public and private -- to cover PrEP and all of the required tests and follow-up doctors' visits. We must also provide the resources necessary to help people without insurance access PrEP. Nearly four decades since the beginning of the HIV/AIDS crisis that took so many lives and caused countless others to live in fear, we can and will stop the spread of this disease."

Other bills have aimed to make PrEP more accessible, but none has passed.

In this year's State of the Union address, President Donald Trump asked Congress to make a commitment to eliminate the HIV epidemic in the United States in 10 years.

In May, the Trump administration announced that it had negotiated a donation from Gilead Sciences Inc., the company that makes Truvada, for up to 200,000 individuals each year for up to 11 years or until the generic drug becomes available. The government would cover the cost of distributing the drug.

The donation "will help us achieve our goal of ending the HIV epidemic in America," Trump tweeted.

Some of Harris' rivals for the 2020 Democratic presidential nomination have made PrEP affordability a part of their campaigns. In his plan for LGBTQ+ equality, Beto O'Rourke says he would tackle "price gouging by drug companies so critical and effective treatments like PrEP are accessible and affordable" and would "ensure that LGBTQ+ people have equal access to health insurance and health care," including "HIV prevention and treatment."

Sen. Kristen Gillibrand promised that she would work with the CDC "to make generic PrEP drugs more widely available and affordable."