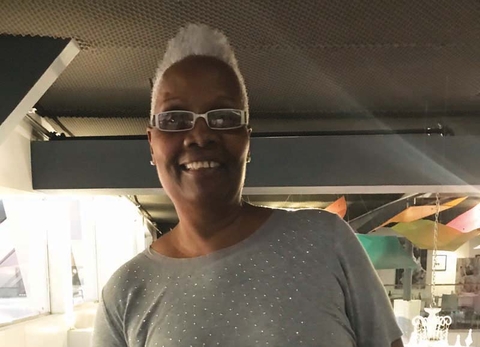 I had the honor of interviewing Pan-American Games Silver Medalist and 2-time Olympian Gale Fitzgerald, and she is a delightful inspirational woman.

When I first read about her, I automatically thought very highly of her. Here she is in the early 70s a 6-foot 3-inch black woman (with a strong presence) taking on events such as the Pentathlon, in which one must compete in several sporting events to be proven as the ultimate athlete.

Was I a fan girling out? Yes! Because, thanks to my Fairy Godmother, Robin Dorner, I got to interview an American Olympian who just happens to be a lesbian and she is still impacting the world today. Gale maintains a leadership role in her Non-Profit called Higher Power Youth Academy created to empower young people of color. Her goal is to build a sports academy to train the youth to become International athletes in all fields of sports.

One of my first questions to her was, of course, about sports. “What do you think sports organizations or teams can do to make LGBT+ people feel more comfortable about coming out?” She responded, “Leadership and coaches have to embrace people and find out who they are because that is what’s really important. Allow people to be free and help them understand that we will be there for them.”

Then I asked her, “Do you think that in today’s society black LGBTQ+ athletes, at all levels, can safely come out of the closet without losing their positions or endorsements?” She answered, “I think it’s safe to come out at this particular time, but it is a personal choice. Some want to focus on their athletic participation but [ultimately] it is their choice.”

I always like to ask people what their youth or young adulthood was like because many times I have been surprised at the support that is given, especially towards black LGBTQ+ people from a certain era. Gale said her family has always been affirming of her sexual identity and love her for who she is.

Since my article was going to be published in February which is Black History Month, I thought I would ask her who her favorite person in Black History is to which she replied, “Well I think to be quite honest with you, Muhammad Ali was very, very important to me. As an athlete and as an African American person that stood up for what his beliefs were.

“To have a belief in something and no matter what not be swayed by anything outside of yourself is so very important.”

Many times, society likes to place black people in boxes so that they do not have to get to know us as individuals. My take away from Fitzgerald is this: Yes, you can still be known as a black LGBTQ+ person but make sure that when people think of you, that’s not all that they remember about you. Make your personality and character the lasting memory that they will carry, and all the rest is secondary.

I will not think of her only as a black lesbian Olympian rather as a pioneer, motivator, leader, and inspirational figure.

I will leave you with a message from Gale. “Whether you’re gay, straight, or transgender, I think what is important for me is behavior as a human being. The respect that you garner for yourself is the way people will treat you.”