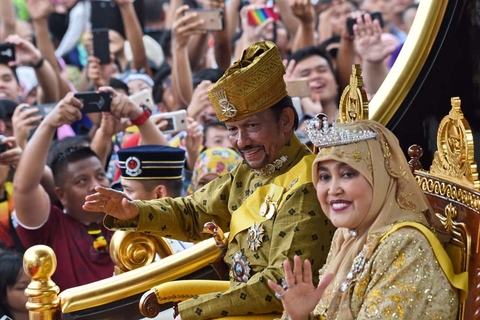 Brunei's new anti-gay law goes into effect this week. Here's how the world is reacting

A law goes into effect Wednesday in Brunei that will punish adultery and homosexual sex with death.

Anyone found guilty of the offenses will be stoned to death, according to a new penal code based on Sharia law, an Islamic legal system that outlines strict corporal punishments.

The strict new laws were announced by the Sultan of Brunei, Hassanal Bolkiah, in 2014 and have been rolled out gradually in the small nation on the island of Borneo in Southeast Asia. The latest phase of implementation, including the brutal new provisions, was quietly announced on the Brunei attorney general's website in December.

The Sultan "does not expect other people to accept and agree with it, but that it would suffice if they just respect the nation in the same way that it also respects them," according to the government website.

The country has no plans to halt the law amid international pressure, according to a statement from the office of Brunei's Prime Minister released Saturday.

Brunei government agencies have not responded to CNN's inquiries.

The controversial proposal has provoked strong opposition in some quarters, and actor George Clooney called for the immediate boycott of hotels owned by the Brunei Investment Group, which is controlled by the Sultan of Brunei, in an op-ed he wrote for Deadline.

Here are some of the reactions from around the world:

Governments and politicians
US Department of State

The State Department said it is "concerned" by Brunei's decision, and "some of the punishments in the law appear inconsistent with international human rights obligations," a department representative said in a statement.

"Governments have an obligation to ensure that all people, including LGBTI people, can freely enjoy the universal human rights and fundamental freedoms to which they are entitled," the statement said.

"We strongly oppose human rights violations and abuses against LGBTI persons, including violence, the criminalization of LGBTI status or conduct, and serious forms of discrimination."

Biden shared a CNN article on the new law on his official Twitter account, writing, "Stoning people to death for homosexuality or adultery is appalling and immoral. Every single person on earth is entitled to be treated with dignity and to live without fear. There is no excuse -- not culture, not tradition -- for this kind of hate and inhumanity."

Kurz says Brunei's decision to introduce the death penalty for gay sex is "cruel and inhumane" and should be withdrawn.

In a statement on Twitter, ‏Kurz said: "I call on the Sultanate of Brunei to withdraw the death penalty by stoning (of) homosexual acts between consenting adults. The same goes for other countries which have the same cruel & inhuman laws. No one should be criminalized based on their sexual orientation or gender identity."

Brunei's penal code would be in breach of the UN Declaration of Human Rights, Wong posted in a statement on Twitter. "(Australia's) Labor (Party) is deeply concerned by the Brunei government's plans to implement new laws that would see adultery and homosexual acts between consenting adults punishable by death," she tweeted.

"No one should face the death penalty because of who they love. Brunei's decision is barbaric and the UK stands with the LGBT+ community and those who defend their rights," Mordaunt said on Twitter.

Clark said the introduction of the new penal code is "shocking news" and "provides for death by stoning as punishment for gay sex."

"Hard to comprehend what could be driving such a barbaric move which stands in stark opposition to fundamental #humanrights principles," she tweeted.

Golriz Ghahraman, human rights lawyer and a member of the New Zealand Parliament

"I've said I will be raising it with the ministers involved (trade and foreign affairs). We buy crude oil and sell dairy to Brunei so should consider our leverage there as well as diplomatically to express our outrage," Ghahraman wrote on Twitter.

"Pending provisions in Brunei's Penal Code would allow stoning and amputation as punishments -- including for children, to name only their most heinous aspects," Rachel Chhoa-Howard, Brunei researcher at Amnesty International, wrote in a statement this week.

"Brunei must immediately halt its plans to implement these vicious punishments, and revise its Penal Code in compliance with its human rights obligations. The international community must urgently condemn Brunei's move to put these cruel penalties into practice."

"The Brunei Project does not currently support a boycott of Brunei-owned businesses and we do not believe that such an approach will be productive," the rights group wrote on Facebook.

"While the boycott campaigns that emerged in the United States and elsewhere in 2014 were useful in drawing attention to what was happening in Brunei, the boycotts did not enjoy widespread support from within the country, where they were viewed as being a direct attack on the people of Brunei and the country as a whole, rather than the policies and laws of the Brunei Government."

However, the group underlined its support for dialogue to end "abhorrent laws," including the use of torture.

The British music legend praised Clooney's stance on Twitter, adding that he and his husband David Furnish "have long refused to stay at these hotels and will continue to do so."

John tweeted out a list of hotels, encouraging followers to join in the boycott. "Our hearts go out to the good, hardworking employees of properties owned by the Sultan of Brunei, many of whom we know to be gay," he wrote.

"I stand with George Clooney, a good man doing the right thing, fighting an unjust and barbaric law," the actress tweeted.

"New laws in Brunei will punish adultery and gay sex with death by stoning," the Virgin Group founder wrote on Twitter.

"This abhorrent, inhuman and medieval piece of legislation has no place in the 21st century."

Reactions have been mixed from some of the hotels of which Clooney urged a boycott in an opinion piece.

All three hotels are owned by the Dorchester Collection luxury chain.

"Dorchester Collection's Code (emphasizes) equality, respect and integrity in all areas of our operation, and strongly values people and cultural diversity amongst our guests and employees," the company said in a statement.

"Inclusion and diversity remain core beliefs as we do not tolerate any form of discrimination."

"At this stage we are not commenting on George Clooney's boycott, but we want to stress that we do value LGBTQ rights," Alexandra Chlopek, press manager at Le Meurice, told CNN.

"We are not taking a position on George Clooney's boycott. We belong to the Dorchester Collection," Aude Lebarbier, Hôtel Plaza Athénée's communications manager, told CNN.

"We are a French hotel with values: respect, equality and integrity for our employees and our customers. Any form of discrimination is not tolerated."