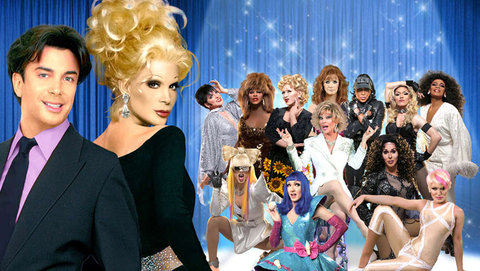 “Divas” official promo photo with Marino at far left next to his Queen impersonation of Joan Rivers. Official photo.

Frank Marino is no longer bragging about being a headliner show in Vegas for over 30 years, because the rumors are true. It’s “Bye, Felicia” for Frank Marino, Divas Las Vegas, and the girls.

His star has fallen amid rumors of wrong-doing by the parent company, Caesars Entertainment.

Divas Las Vegas featured an all-star cast of female impersonators including Marino portraying Joan Rivers. The show ran for a total of more than three decades beginning as An Evening at La Cage at the Riviera from 1985-2009.

Signs and ads promoting Divas have been removed throughout Vegas. The show-closing was abrupt.

The reason could be greed. At the end of each show, Marino would encourage the audience to purchase Divas merchandise stating, “All proceeds go to the Make-A-Wish Foundation.”

Well, they didn’t. Not for a long time anyway. According to Caesars, the show was closed so abruptly for non-payments to the charity.

“It came as a surprise to just about everyone at Linq hotel and its parent company, Caesars Entertainment,” reported Vital Vegas. “For example, on the night the show’s untimely end was reported, the Caesars blog auto-posted a story promoting the show. The article was quickly removed.”

“Upon discovering and fully investigating this issue, we immediately took all appropriate actions in response.  Caesars enjoyed a long, mutually successful relationship with the Divas production team, which it hoped would have continued for many more years, and the show’s cancellation is due solely to these circumstances.”

After days of denial, spin and drama, Marino released this statement to the media, “As some are aware, I have historically given a portion of the proceeds from the sales of certain Divas Las Vegas merchandise to the Make-A-Wish foundation. … I’m saddened to say that due to my own negligence, Make-A-Wish has not received a check from me for some time,” Marino said in the statement.

“I am personally embarrassed and ashamed. I take full responsibility and am sincerely apologetic for this situation. I have confirmed the figure which I would have customarily donated to them from a percentage of my merchandise sales and have offered to substantially increase that many times over.

“Make-A-Wish is an important charity and my favorite in the world because it lifts the hearts and spirits of children desperately in need of joy, comfort and compassion. I hope my mistake will not prevent others from donating generously to this organization and I pray that I will be able to work with them for many years to come.”

A Vegas insider told The Gayly, “Word has it Frank was a bitch to work with and charges the girls ‘fees’ for minor infractions in their performances.”

Days after the show closing, media outlets have reported the Nevada Gaming Control Board is investigating Divas and Caesars Entertainment regarding the show’s closing. Not a common practice when a show closes in Vegas.