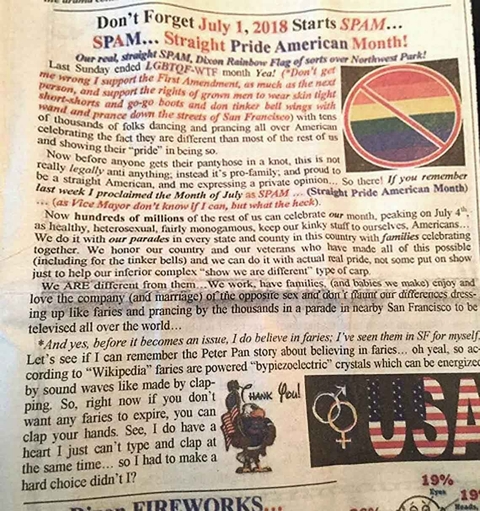 Ted Hickman, the vice mayor of a California town last week penned a homophobic op-ed for the Independent Voice, a local Dixon, CA newspaper. He called for “Straight Pride American Month” or SPAM. 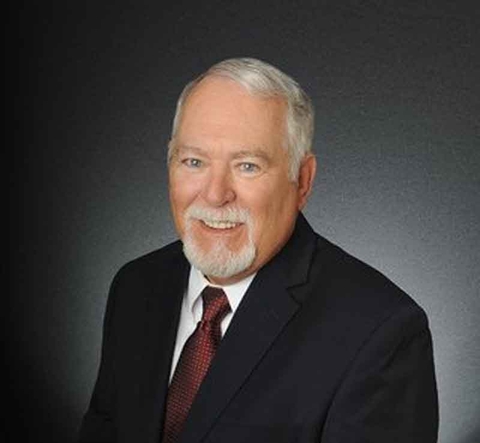 The piece said, among other offensive statements, “Don’t get me wrong I support the First Amendment, as much as the next person, and support the rights of grown men to wear skin tight short-shorts and go-go boots and don tinker bell wings with wand and prance down the streets of San Francisco.”

As an afterthought, he then tries to get himself out of hot water, saying, “Now before anyone gets their pantyhose in a knot, this is not really legally anti anything; instead it’s pro-family; and proud to be a straight American, and me expressing a private opinion… So there!”

People in Dixon are, understandably, upset and are calling for a recall election to remove Hickman from his elected position.

Hickman showed his bigotry – and his ignorance – in his op-ed by saying of LGBT+ people, “We ARE different from them…We work, have families, (and babies we make) enjoy and love the company (and marriage) of the opposite sex and don’t flaunt our differences dressing up like faries (sic) and prancing by the thousands in a parade in nearby San Francisco to be televised all over the world…”

In a phone interview with The Sacramento Bee, Hickman defended his column, saying “It was tongue-in-cheek and had nothing to do with my elected position," and that "thin-skinned people took offense" to his column.

Supporters of the recall effort plan a protest on July 10 at Dixon City Council’s meeting, and at the city’s LGBTQ Pride, planned for July 28.