Caught on camera: In one week there were at least nine instances of police using excessive force 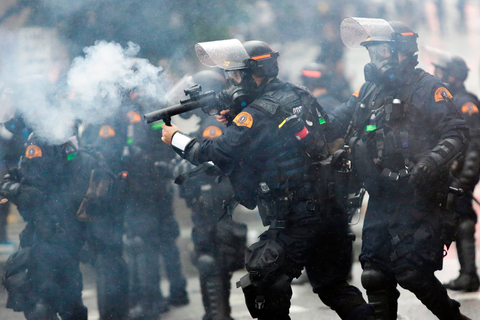 In the wake of George Floyd's killing by police, protesters flooded streets across the country all week to demand racial justice and policing reforms. Most of those protests have been peaceful. Property damage and looting have marred others.

But in several cases, the country has also witnessed what appears to be excessive police force against protesters, reporters and bystanders. Critics have decried the heavy-handed tactics, and they say some cases exemplify the behavior they are protesting.

In one week, footage surfaced of police in Buffalo, New York, pushing an elderly protester to the ground, causing him to bleed from the head. A police officer in Louisville, Kentucky, fired what appeared to be pepper bullets at a TV reporter covering protests. And six Atlanta police officers stopped a car driven by two college students. They smashed out windows and tased one of the passengers.

Here are some of the cases caught on camera.

Video of a demonstration in Buffalo on Thursday shows police officers pushing a 75-year-old man to the ground.

The footage shows a row of officers, wielding batons and equipped in riot gear, near Niagara Square, where protesters had gathered.

Two officers approach the elderly man, Martin Gugino, and push him to the ground. Gugino falls backward and hits his head, which bleeds onto the sidewalk as officers walk past him, some looking down at him.

The officers were identified Saturday by the Erie County District Attorney's Office as 39-year-old Aaron Torgalski and 32-year-old Robert McCabe. CNN is trying to reach them for comment.

They've been charged with one count of assault in the second degree. Both pleaded not guilty Saturday and were released on their own recognizance without bail.

The two officers were suspended without pay, and an investigation is underway. A source close to the situation told CNN on Friday that 57 officers resigned from the police force's emergency response team following the suspension of the two officers.

Buffalo Police Benevolent Association President John Evans told local station WGRZ the officers resigned from the team "because of the treatment of two of their members, who were simply executing orders."

As of Friday, Gugino was hospitalized in serious but stable condition.

Video shows the officers breaking the windows of a vehicle and yanking a woman out of the car. Officers used a Taser on the male driver. The students were headed home after picking up food when they were caught in protest-related traffic.

One of the officers wrote in a police report that he used his Taser because he was unsure whether the students were armed.

"I thought I might be killed," Taniyah Pilgrim, a student at Spelman College, told CNN's Alisyn Camerota on Wednesday. "Nothing really warranted it ... After I realized none of this really had a reason, I was just thinking, OK, this is the end."

Messiah Young, the male driver and a student at Morehouse College, said he hadn't yet watched the video.

"I have not tried to relive that moment at this point," he said. "It's a little too much right now."

Young said his wrist is injured and he has about 20 stitches in his forearm along with bruises all over his ribs.

Two of the officers were fired. All six were booked on Wednesday, five of them on felony charges. They were released on signature bonds, according to the Fulton County Sheriff's Office. CNN is working to reach the officers for comment.

The regional director of the police union said he is concerned about how quickly the officers were fired and charged. He called the charges "premature."

"They were given no due process," said Vince Champion, southeast regional director of the International Brotherhood of Police Officers.

Several incidents caught on video are under investigation in New York City.

In one 27-second video posted to Twitter, a New York Police Department vehicle plows through a crowd of protesters.

The footage, shot last Saturday, shows a crowd throwing objects at the police vehicle, which is stopped in front of a barricade. The vehicle drives into the barricade, knocking down the barrier and protestors as people scream. A person is seen jumping on top of the police vehicle.

A police official said protesters threw a brick and water bottles and placed a flaming bag on top of the vehicle. When the officers noticed the bag was on fire, they hit the gas, the official said.

Mayor Bill de Blasio called the incident "an extremely abhorrent situation." He added that it's "still not acceptable for our officers to ever drive into a crowd."

In another case, video obtained by Gothamist appears to show a New York police officer draw his weapon on a crowd. De Blasio said Monday that the officer "should have his gun and badge taken away from him today," adding that an investigation is underway. CNN has reached out to the NYPD for comment on the incident.

And a third video shows an officer pushing a woman to the ground during protests. The officer is being investigated, according to a law enforcement official.

A bystander told CNN he and other protesters were walking in Brooklyn last Friday, and happened to be filming, when the officer pushed the woman. It's unclear what happened before the incident that was caught on camera.

De Blasio has set up an independent review by the Corporation Counsel, the city's law department, and Department of Investigation commissioner. The police department is also investigating the incidents internally.

On Saturday a senior NYPD official confirmed to CNN that four commanding officers in Brooklyn were reassigned due to their handling of protesters in the first days of demonstrations.

Fort Lauderdale officer was confronted by a black colleague

A Florida police officer was placed on administrative leave this week after he shoved a kneeling protester at a demonstration in Fort Lauderdale on Sunday.

Video captured by Instagram user @Illustrious.CEO shows the officer telling protesters to back up. The videographer, who asked CNN for anonymity citing safety concerns, said some protesters got on their knees and chanted "hands up, don't shoot." The officer then appears to shove a protester on her knees as he walks away.

A black colleague, Krystal Smith, confronts the officer and appears to scold him.

Police and local officials commended Smith and said the incident occurred when tensions were high between demonstrators and police. Earlier this week, Fort Lauderdale Police Chief Rick Maglione said officials believe the altercation took place as police were responding to another officer who said she was surrounded and felt threatened.

Kansas City cops pepper-sprayed a man who was yelling

Police officers in Kansas City, Missouri, were seen in a viral video using pepper spray and restraining a man who was yelling about police using excessive force.

The footage, posted on Twitter on Saturday, shows a man in a crowd of protesters yelling at officers.

"If you ain't got the balls to protect the streets and protect and serve like you was paid to do, turn in your damn badge," the man said.

Several officers, carrying what looks like cans of pepper spray, move to pull the protester out of the crowd. As two officers reach for him, there's some jostling and the police use the pepper spray before forcing him to the ground.

As nearby protesters shout in anger, the officers turn the pepper spray on the crowd.

The man was arrested for "protest-related charges," according to police spokesman Jacob Becchina. He did not specify what law the man was accused of breaking but said the incident would be reviewed.

A Louisville officer fired pepper balls at a reporter

Reporter Kaitlin Rust was covering protests last weekend in Louisville, Kentucky, where demonstrators have been demanding justice for Breonna Taylor, a black EMT who was fatally shot by police in March.

Rust, a reporter for CNN affiliate WAVE, was live on air with her cameraperson when a police officer walked into the camera's shot, aimed directly at them and fired what Rust described as pepper bullets.

"Who are they aiming that at?" the anchor asked.

The Louisville Metro Police Department later apologized to Rust. LMPD Special Advisor Jessie Halladay said authorities were unable to confirm that the officer in the video was a LMPD officer. She said he could be a member of a special response team.

Halladay said the department would review the video again when the protests subside and determine if the incident warrants disciplinary action.

A police officer in Fairfax County, Virginia, faces up to three years in prison in connection with his arrest and use of a stun gun on a black man who cried out, "I can't breathe."

Fairfax County police released bodycam footage of the incident, which appears to show Officer Tyler Timberlake using a stun gun on the man without provocation.

Timberlake, an eight-year veteran of the force, faces three charges of assault and battery in connection with the incident, said Fairfax County Commonwealth's Attorney Steve T. Descano. The officer faces up to 36 months in prison, Descano said.

An attorney for Timberlake told CNN on Sunday that he had just started reviewing the case and would not be commenting at that time.

The victim has not been identified publicly. Following the incident, he was treated at a local hospital and released, Roessler said, adding he reached out to the victim and his mother to express his "disgust" with the officer's actions and "assured her justice will be served."