Celebrate the 100th anniversary of the end of World War I, and beware its results 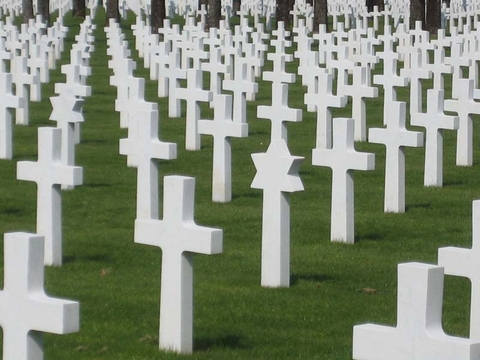 One of the largest United States World War One cemeteries in the north of France. Photo by Rob Howard.

On Veterans’ Day, November 11, we will celebrate the 100th anniversary of the end of World War I. The signing of an armistice between Germany and our allies signaled the end of “The Great War” as it was then called. At that time, it was the worst war in loss of life the world had ever seen.

Just 21 years later, the Second World War broke out. Many historians consider it a continuation of the first war, made inevitable by the diplomatic blunders that came with peace. Many of the problems we still face today are a result of those blunders, in particular, the way the allies treated the Middle East as the Ottoman Empire faded into history.

The Great War divided up empires in haphazard ways leading to conflicts which continue today. It opened the way for the Bolshevik revolution in Russia, leading to over 70 years of tyranny.

The treatment of Germany, when peace terms were dictated, left a country that had escaped the physical damage of war with famine and disease, a devastated economy and internal conflict that led to the rise of the totalitarian Nazi state in 1933.

Between the two wars, there were over 100 million military and civilian deaths. The final toll continues today in Iraq and Afghanistan.

Compounding the disaster of the two wars was the reluctance of the United States to become involved. World War I started in 1914; the US entered the conflict three years later. Our troops provided the margin of victory over Germany; the armies of England, France and Germany were exhausted from the stalemate of trench warfare.

Another result of the end of World War I was the rise of totalitarian regimes that oppressed their people and spread conflict around the globe.

World War II started in 1937 in China, 1939 in Europe. By then, the United States had become isolationist. That attitude was fueled by right-wing agitators, and organizations like Charles Lindberg’s “America First.” We did not enter the war until we were attacked at Pearl Harbor in 1941 after much of Europe and Asia lay in ruins.

That war ended with a more enlightened policy toward Germany and Japan, leading to their emergence as strong democracies and economic recovery. The North Atlantic Treaty Organization (NATO) was formed and included Germany, as a bulwark against Communist expansion by Russia and its client states.

The United Nations was formed to help resolve disputes in the world without resorting to military solutions. Europe united as the European Union, with France and Germany the two strongest economies. As a result of these actions, we have seen over 70 years of peace among the largest countries in Europe.

A dozen presidents have tended the positive results achieved after the second great war of the 20th century.

Now, we have a president ignorant of history, who ignores the unity of the United States and its allies. He attacks NATO, encourages right-wing politicians around the world and favors the breakup of the European Union. He insults our closest allies and kisses the butts of authoritarian dictators around the world.

This Veterans’ Day, and every day, we need to remember the results of isolation, trade wars and misguided attempts at diplomacy. We don’t need to add to the 100 million casualties of the 20th century by risking another war, this time with nuclear weapons.

We need to take back control of Congress to provide a check on an egomaniac who governs by whim and risks all of us in the process. By November 7, we will know the results of the midterm election and see a clearer path toward future action to save our democracy.

On November 11, thank veterans for their service!