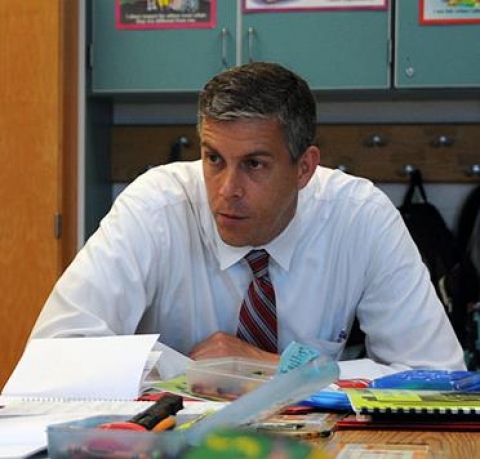 Secretary of Education Arne Duncan announced new policies in the treatment of students in a same-sex marriage, or whose parents are a married same sex couple. US Navy photo by Petty Officer 2nd Class William Selby.

Washington (AP) — Students in same-sex marriages will be treated the same as their straight married classmates when it comes to federal college loan applications, Education Secretary Arne Duncan said Friday in a shift that reflects this year's Supreme Court ruling that broadened gay rights.

"We must continue to ensure that every single American is treated equally in the eyes of the law, and this important guidance for students is another step forward in that effort," Duncan said in a statement.

The Education Department also revised its required Free Application for Federal Student Aid to reflect more inclusive language about students and their parents. The department said it would recognize a student — and parents — as legally married if the couple was legally married in a state that permits same-sex marriages.

The new application forms do not distinguish between gay or straight marriages.

The department also said students' eligibility for federal aid would be the same in all 50 states, regardless of where the student attends school.

For instance, a same-sex couple from Massachusetts, where gay marriage is legal, would be treated the same as a straight couple if one or both applied for a federal student loan to attend a school in one of the 34 states that do not permit gay marriage. The same standards would apply to parents in same-sex marriages.

"As students fill out their FAFSA this coming year, I'm thrilled they'll be able to do so in a way that is more fair and just," Duncan said, using the financial aid application's acronym.

Before the Supreme Court ruled this summer, the Education Department was bound by the Defense of Marriage Act, which prohibited all federal agencies from recognizing same-sex marriages. The Clinton-era law defined marriage as between one and one woman and hurt many applicants in same-sex marriages.

Friday's move is the latest from the Education Department to be more helpful to students in same-sex marriages or with married gay parents.

Even before the ruling, Duncan instructed the department to collect information on both of the student's legal parents, regardless of marital status. That meant children being raised by unmarried couples — regardless of sexual orientation — would have both adults' incomes factored into financial aid eligibility.

That was an effort to reflect that same-sex couples share financial responsibilities for children, even if their state does not sanction gay marriages.