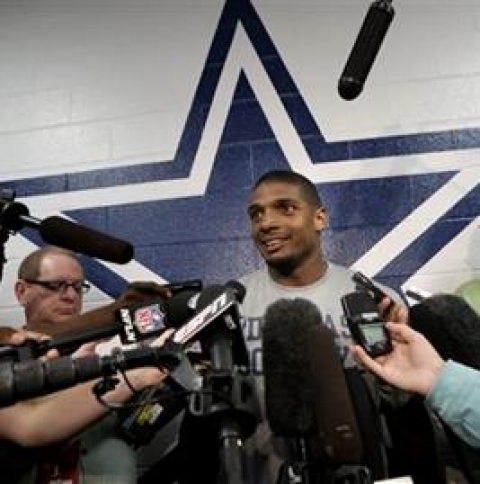 If history is any guide, Michael Sam should be getting ready for his first NFL game.

Instead, he's stuck on the practice squad with the Dallas Cowboys.

The league, it would seem, isn't quite ready for its first openly gay player.

We're not talking about his teammates, either.

There was never any indication that Sam was a distraction in the St. Louis locker room, as so many had predicted. In fact, the only tempest was a regrettable ESPN report on Sam's showering habits — which the network later apologized for — but still drew a pointed retort from Rams star Chris Long: "Dear ESPN. Everyone but you is over it."

While players don't seem to have a problem with Sam, we can't say the same about the guys running the teams.

We were told Sam would be treated like any other player. That didn't happen from draft day to cut day.

Sam was selected much lower than he should've been, so we'll hold off on congratulating the supposedly progressive Rams for taking him with the 249th out of 256 selections. He played well enough in the preseason to warrant a shot on a 53-man roster, whether it be in St. Louis or somewhere else. At the very least, the delay in signing him to the Cowboys' junior varsity — reportedly at the behest of league officials — showed that he's not being treated as just another player, especially one with such an impressive college resume.

Sam was the defensive player of the year in the mighty Southeastern Conference, which had always been a sure path to the NFL.

— Before Sam, The Associated Press awarded its defensive player of the year award to 16 players over a 17-year span beginning in 1996 (Georgia's David Pollack was a two-time winner).

— Of those previous winners, 11 were selected in the first round of the NFL draft, the highest being LSU's Glenn Dorsey, who went No. 5 in 2007, and Tennessee's Eric Berry, also taken fifth in 2008.

— Fifteen of those players made the team their rookie season, the only exception being Carolina's Deon Grant, who was on injured reserve his first year. All but two of the 15 (Leonard Little with St. Louis in 1997, Nick Fairley with Detroit in 2010) started at least one game as a rookie; five of them started all 16. Grant returned in his second year to start every game, as well.

— Beyond all those first-round picks, three of the SEC's defensive honorees were selected in the second, two went in the third, and Florida's Alex Brown — a fourth-round pick and No. 104 overall in 2001 — had been the lowest selection from that group.

Sam, in other words, was drafted 145 places lower than any of the previous winners of the AP award, which made it much easier for the Rams to let him go even though he had three sacks and 11 tackles during the preseason — including a team-high six tackles in his final exhibition game.

Of course, there are legitimate questions about Sam's skills.

He's a little too slow to be an outside linebacker, not quite big enough to be a defensive end — one of those dreaded "tweeners" who might have trouble settling on a position. He had some poor workouts leading up to the draft, so it's only natural that his stock dropped a bit from the original projections that he would go somewhere between the third and fifth rounds. And we'll even cut the Rams some slack, since defensive end is one of their deepest positions and maybe there really wasn't any room for Sam.

But it's beyond comprehension that no one else could've used him, or that it took four days from the time he was cut, after most teams had long since stocked up their practice squads, to land a second chance with the Cowboys.

Buffalo Bills lineman Eric Wood might have summed it up best on Twitter, blaming the ESPN report for scaring off any team that might've been interested in signing Sam after he was cut by the Rams.

"No one wants the distraction," Woods wrote.

According to NBC's Peter King and ESPN's Stephen A. Smith, the NFL was so concerned that it called several teams, trying to prod someone into adding Sam to a practice squad. The Cowboys, desperate to improve their pass rush, finally stepped up to keep the league from a total public-relations nightmare.

At least he's got a shot, which Sam certainly earned.

"It's not a big deal," Cowboys running back DeMarco Murray said. "If he's here to help us win, treat him like any other guy. Doesn't matter."

If only everyone felt that way.