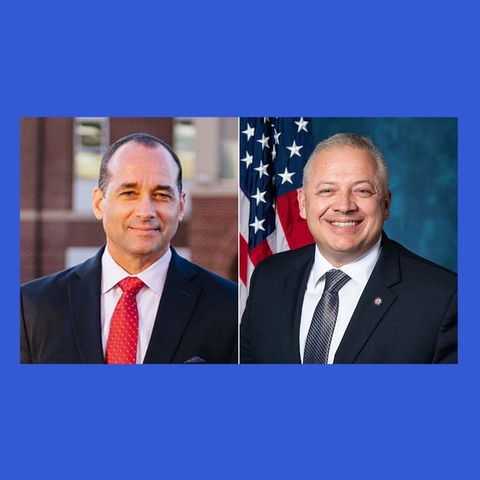 A Republican congressman, whose decision to officiate a same-sex wedding last year angered some local Republicans, lost his party's nomination to a conservative challenger in Saturday's drive-thru convention.

Rep. Denver Riggleman of Virginia lost to Bob Good, a former Campbell County supervisor and former employee of the Liberty University athletics department, with 42% of the vote to Good's 58%, according to results provided to CNN by 5th District Republican Committee Chairman Melvin Adams Sunday morning.

All day Saturday, delegates voted in the 5th District's GOP convention by driving through the parking lot of a Lynchburg church -- a change in format due to the coronavirus pandemic. The church was the only voting location in the expansive district, which stretches from the North Carolina border north toward the outer suburbs of Washington, DC.

The ballot tabulation went into the early hours of Sunday morning. Late Saturday, before the results were known, Riggleman tweeted about "voting irregularities" and "ballot stuffing."

"Voter fraud has been a hallmark of this nomination process and I will not stand for it," the congressman tweeted, before adding that the Republican Party of Virginia "needs to reevaluate their priorities."

"We are evaluating all our options at this time," he said.

CNN has reached out to Riggleman's office for comment.

Adams said in an email Sunday there were only a handful of discrepancies. "As I understand, there was a difference between the marked delegate list and actual ballot count (in once instance) and a ballot that seems to have been fraudulently cast (in another), with a total discrepancy being a matter of two (2) raw votes," Adams said.

The internecine battle was a test of the enduring power of cultural conservatism within the GOP -- and whether an incumbent, whose libertarian streak led him to support same-sex marriage, would be punished by his party's base despite having the backing of President Donald Trump.

Riggleman, a freshman member of the hardline conservative House Freedom Caucus, officiated the wedding of two of his former male campaign volunteers last summer. Some members of the 5th District's GOP committee, who also found him to be insufficiently conservative on immigration and other issues, tried to censure him. Two county GOP committees voted to censure him and another unanimously passed a motion of no confidence against him, according to Roll Call.

Riggleman's campaign had pushed to have a primary rather than a convention, which restricts the participants to GOP delegates, who tend to be more conservative party activists than typical primary voters.

The congressman's campaign also pushed to have the location of the convention moved, accusing the district's GOP committee of favoring Good since the church is located in his home county. But the committee rejected the campaign's appeal last month.

Riggleman significantly outraised Good, raking in about $1.6 million to Good's roughly $186,000 by the end of the pre-convention reporting period on May 24, according to filings with the Federal Election Commission.

Despite Good's previous employment at Liberty University, Riggleman had the backing of Jerry Falwell Jr., the school's president. Trump had endorsed the congressman in December, calling him a "true CONSERVATIVE leader" who would support his agenda.

The Trump administration late Friday rolled back an Obama-era regulation prohibiting discrimination in health care against patients who are transgender.

Good jumped into the race in September, accusing Riggleman in an interview with The Hill of having "betrayed" the trust of the conservative Republican base of his Virginia district, which includes Charlottesville and Danville.

An immigration hardliner, Good wants to end birthright citizenship and make English the official national language to "stop accommodating immigrants and their native tongues, because it's our unity that's our strength," according to The Roanoke Times.

He will face the winner of the Democratic primary held later this month.

Good, though, will have to wait to see if he makes the November general election ballot after missing the June 9 filing deadline. On Friday, the Virginia Republican Party sent a letter to the State Board of Elections asking for an extension for Good and other candidates who missed the filing deadline to appear on the ballot.

The letter said that granting Good an extension would not be unlike election changes localities have made across the state this year during the pandemic, including the lowering of signature requirements for ballot access. The board is slated to hold a meeting on July 7 to decide on the extension.

The Democratic Congressional Campaign Committee put the 5th District on its target list for 2020, and Democrats think that Good as the nominee may give them a better shot at flipping the district, which outside Republican groups have spent money in during the past two cycles. But in a district that Trump carried by 11 points in 2016, Republicans likely start with an advantage.

A distillery owner, Riggleman first won election to Congress in 2018. He gained national attention during that race when his Democratic opponent attacked him as "a devotee of Bigfoot erotica," which he denied in an interview with CNN at the time. Riggleman acknowledged writing two books on Bigfoot, including an unpublished text called "The Mating Habits of Bigfoot and Why Women Want Him," both of which he said were "parody" and stemmed from running jokes he had with friends from the military.

Riggleman is the third House incumbent to lose this year after Democratic Rep. Dan Lipinski of Illinois and Republican Rep. Steve King of Iowa lost their primaries earlier this year.